I’ve said before that I almost never cry about Grayson. I recognize that there’s an emotional disconnect there, and I think most of the time that wall between reality and my emotions is necessary for me to function day to day, take care of my children, and generally have a positive outlook on most aspects of life.

But several times over the past few days, the emotions have been seeping through the cracks of that wall. And instead of pushing the feelings down and hurrying to the next thing on my to-do list, I’ve been intentional about allowing myself to feel what I feel and I’ve even been able to cry a little.

We went to the ranch this past weekend, and really had the best time we’ve had there yet. And I know this is because Charlotte can fully participate now: she’s totally mobile, understands what we say to her and has boundless enthusiasm and energy for going and doing. And she and her cousin Theo were just precious and many memories were made: posing together in the bathtub covered in soap suds, bouncing up and down on the bed, chasing each other around the house, and getting filthy dirty while discovering nature together. Those two are a crazy, silly, adorable pair…a pair that really should be a trio.

Grayson is less than a month away from turning four. FOUR! Four year olds love to get dirty, pester their little sisters and stay up late laughing and singing with their cousins and aunts and uncles. I try to imagine how Grayson would be if he was healthy- how silly he would be, and how much energy he would have. It’s hard, and I can’t really imagine it about him- just about a generic kid that kind of looks like him. But it’s not him. Grayson is who he is and I love him for who he is- but as his sister grows further and further from her days as a baby and starts doing more and more things, it hits me like a ton of bricks how limited Grayson is and how much he misses out.

But we include him where we can. He hangs out on the porch with the guys,
cuddles with his Grammie and snuggles with his sister.

And oh how we love him so, even as it hurts.

Dear Charlotte,
It’s getting harder and harder to take these monthly pictures of your squirmy, wiggly self who wants to do anything but look at the camera and smile. Oh well, real life, right? Anyway, Happy 19 Months to my sweet, sassy ball of energy and fun.

I love you so, so much my silly, smart little sidekick. Keep being you, because you are pretty amazing.
Love,
Mommy

Sometimes when I don’t write anything of substance for a few weeks it’s because I honestly don’t have anything to say. And sometimes it’s because I have so much to say that I can’t figure out a coherent way to get it down in writing and/or I’m afraid of the response. This is one of those times.

I’ve written several times in the past few weeks how BlogHer made a huge impact on me. One of the biggest impacts was how groups of people are treated in our country, whether that be because of their race, sexual orientation, mental health status, or whatever. And to be honest, before I really didn’t think about it much at all. Embarrassing as it is, I’m so privileged that in my small little universe, it really never affected me. In most areas, I’m in the majority and therefore have grown up and live with the comforts that come from being in that majority. I’m white. I’m Christian. I’m straight. I’m college educated. I’m middle class. I’ve never had to consider how my race or status in society affects anything I do.  I do, of course, live in the disability community, but even there, my family has been treated extremely well. Sure, Grayson’s illness and disabilities make life more difficult, but I can’t think of one instance where we have been discriminated against because of it, and I can think of many, many instances where we’ve been blessed in the midst of those difficulties. We’re lucky.

There was a lot of discussion at BlogHer about race and racism in America, and the conversations that surround it. Kristen Howerton, a blogger I respect greatly, said if you aren’t participating in the conversation yet to first just listen. Pay attention. Don’t join in if you are still ignorant.

So that’s what I’ve been doing. This week, with the Ferguson situation unfolding, I’ve been reading a lot. Listening a lot. I’m not ready to publicly jump in this conversation just yet, but I do think I’m a little less ignorant and a lot more open minded than I was a month ago. I don’t really actively participate in Twitter much, but I’ve learned so much by following conversations led by activists there. I’ve read a lot of blog posts on Ferguson, both by blacks, whites, conservatives and liberals. I’m learning a lot, and really trying to understand how it must feel to live in America and not be white.

What’s really interesting to me is if I hadn’t started following these people on Twitter or started really paying attention, I don’t know that I would even realize or more than a minute’s thought to what’s happening in Missouri. I usually have the Today Show on in the mornings, and their reports have been no more than a few minutes. My Facebook newsfeed, except for the posts by bloggers/activists I don’t know in real life, has exactly ZERO posts on Ferguson. Ryan’s is the same way. No one (that I know personally) in my community is talking about this, at least online. I think there’s something really wrong about that. And I would be a total hypocrite if I didn’t include myself as part of the problem. I haven’t posted about it, or been talking about it to my friends and family. It’s part ignorance, and a lot fear of saying the wrong thing and offending someone.

She is fearless. She can’t swim, yet wants no help as she goes deeper and deeper, further and further from shore.

She is independent. I’ll get my own snack, thankyouverymuch. And yeah, she really, really likes grapes.

She’s into self expression.

There’s no one she adores more than her cousins…

Except for her brother.

Tonight she thought her baby doll needed peas for dinner more than she did.

Also, from looking at these pictures, perhaps I should make more of an effort to actually put clothes on my kid more often. Oops.

I witnessed a miracle this afternoon: Charlotte actually sat in one spot and entertained herself for over 15 minutes! Even Grayson was shocked and amazed! 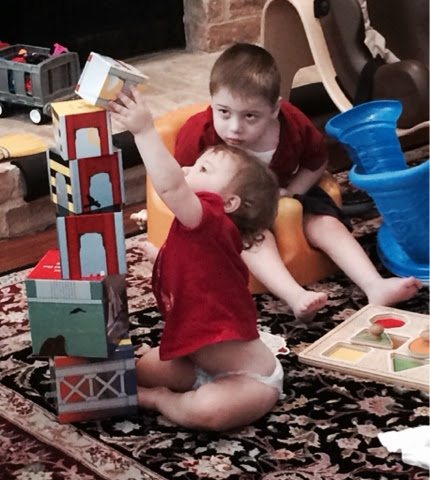 It’s been over a week since I got home from BlogHer, and I’ll be honest, last week was emotionally hard. Really hard. I came away from that weekend on such a high- inspired and motivated to write, make more connections online, and make a difference in the world- and then I came home to…my life. My life that is full of blessings, and important work, but that is also repetitive, monotonous and a time-sucker. And I got a little depressed. And I was tired, oh so tired. Part of that might have to do with the fact that Ryan went back to work, Grayson’s nurse left for a month long trip to Africa, and my parents left the country for a few weeks. It wasn’t just that they weren’t here physically, it was knowing that they couldn’t be here. Grayson is also off school for two weeks, which presents its own challenges. And I missed my friends- I missed spending time with Lisa for hours and hours like we were back in college, and I missed Esperanza- I looked forward to this trip, and meeting her, for months, and it was wonderful, but it’s over. Waaaaahhh.

Last weekend I sat in front of women who wear power suits on Monday mornings, while I’m wearing  faded tshirts and khaki shorts. They are running billion dollar media companies while I’m scrubbing smashed blueberries off my kitchen floor and filling syringes with medication. Last weekend I attended a writing workshop where we read poetry and talked about imagery in our writing, and today I fielded meltdown after meltdown from my daughter when I gave her exactly what she was asking for (and therefore my next blog post just might be titled “Toddlers are Insane”).

I don’t need to be told that what I do is important, and valuable and is changing the world (I may not be Arianna Huffington but I’ve read every parenting article on her site), but it is hard not to be jealous or wistful when you are reminded that there are people out there with really cool jobs that don’t involve poopy diapers or naptime negotiations. That there are people who blog and thousands of people want to read and comment on what they’ve written and big companies want to give them money to talk about their products. There are people who write and their posts go viral and they are chosen to read their writing in front of thousands of women at a huge blogging conference. And what’s silly is I’m not even sure I would want any of that, but…

I have so many things I want to write about, but just can’t seem to find the mental energy or clarity to write about anything more than the repetitive challenges that are being a mom. And maybe that’s just where I am right now. Maybe I don’t need to change the world, or tackle social justice- today. Today I need to vent about toddler tantrums and how my heart hurts when Grayson looks into my eyes after he throws up with that save me look, because I can’t save him. Because I’ve read said HuffPost articles, and because I know people past the baby/toddler stage of parenting, I know that this season won’t last forever- the days are long but the years are short, blah blah, blah. The physically and mentally exhausting sleep/diaper/feed/meltdown/play cycle is temporary and will be replaced by less physical, but more emotional challenges. Perhaps then I’ll have more time and brain cells to devote to some of these other topics that other bloggers seem to write about so frequently and effortlessly.

#Reentrysucks but I’m determined for this week to be better. I’m embracing the craziness, the stickiness and the joy that comes from being Mom to my little people. And honestly, I’d much rather wear a tshirt than a power suit anyway.