This post may be both me venting and asking for advice. There’s a lot going on in our family right now- as I’ve mentioned before, we are trying to move and create a more family/kid friendly lifestyle. The process of selling our home, which hasn’t happened, has been beyond stressful. And of course we added a new baby to our bunch less than 6 months ago. And while he’s of course a precious blessing, babies by nature don’t exactly ease an already stressful situation.

So, all that being said, the problem I’m writing about today may be perfectly normal considering the circumstances (or even not considering the circumstances). But I really don’t know, other than I’m tired of it and upset by it.
Since Nolan was born, Charlotte has been downright mean to (or really, about) Grayson. She tells me at least 10 times a day that “I don’t like GG, I like Nolan.” and “I like Nolan the best”. When Grayson retches, she screams and says “No GG, STOP- I don’t like that noise!” and when he’s throwing up and I’m in the middle of holding his head she’s whining at me about a snack, or to come play with her, completely unsympathetic to her brother’s pain. But to be fair on that one, his constant retching/throwing up is all she’s ever known- it’s “normal”.
The worst is when we are taking and picking Grayson up from school. Charlotte gets SO angry and that’s when the chanting “I don’t like GG” usually begins- in the car. If we have somewhere to go after we drop him at school, a lot of times when we pull into the parking lot of his school she gets hysterical. And she never, ever gets in the car in the afternoons to pick him up without complaint.
Charlotte adores Nolan. She will get him a blanket, diaper or toy when I ask, but never when I ask for Grayson. She loves helping me make his bottle. She asks me where he is every morning and has started playing with him. Of course, he gives her more feedback than Grayson does, but he’s also a lot louder. Strangely though,his crying doesn’t really bother her other than in the car, and she never acts jealous or upset when I’m nursing him or doing anything else just with him.
I guess I’m wondering why we have this sibling dynamic and what I can do to change things. This started right after Nolan was born and I thought it would be temporary, but it’s not getting better. I’ve tried talking to her about using kind words, I’ve gotten angry at her, and right now, I’m just ignoring her and telling Grayson I love him when she starts in on her chants.
And I’m also wondering at what age and how I start explaining Grayson’s disease to his siblings. I have a hard time explaning it to adults, much less a three year old. Charlotte has never said anything directly about her brother being different, and the few times I’ve sort of brought it up didn’t bring any meaningful feedback from her at all. But I do know she’s starting to realize that there are a lot of things we can’t do when Grayson is with us, and I’m afraid that’s really going to be damaging to their relationship.
All this is so hard. I so want our typical kids to love and protect their brother as much as Ryan and I do, but I also want to be sensitive to the fact that there are inevitable negative implications to growing up with a special needs sibling. I also think it’s got to be especially hard to be the brother or sister to a child with disabilities as profound as Grayson’s.
So…how worried should I be? Anything obvious I should be doing/saying to Charlotte about this?
Nolan got his first haircut on Friday. His signature wild “LOOK AT ALL THAT HAIR” dark brown locks are gone, and what’s left is soft, light brown hair that matches his siblings’- a sweet, neat, little boy haircut. 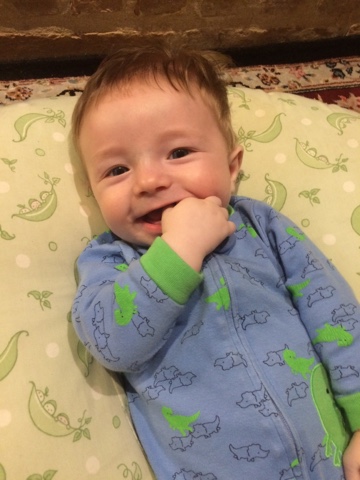 I know there are those who are horrified that my 5 month old baby got a haircut. “But he looks so much older…so much different.” Yeah, he does. And I LOVE IT. 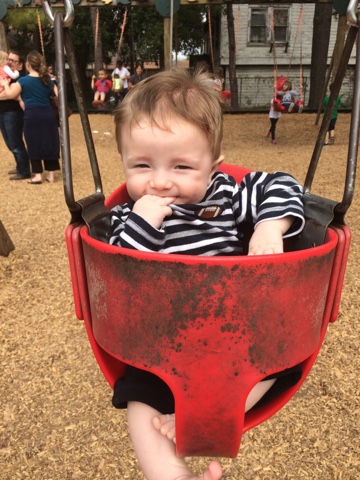 Something changed for me on Friday when I walked out of that salon. It felt like I was holding a brand new baby. Just like his hair, the past few months have felt wild and out of control. Sweaty and scream-y. 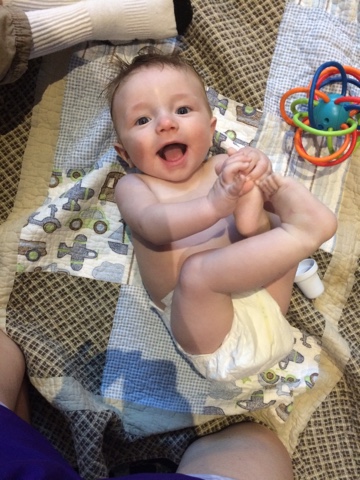 We needed a fresh start, a new beginning. More smiles and less tears. 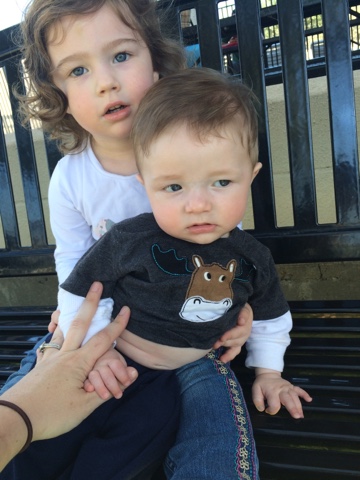 There’s still lots about life right now that deserves the side-eye, but it’s slowly getting better. 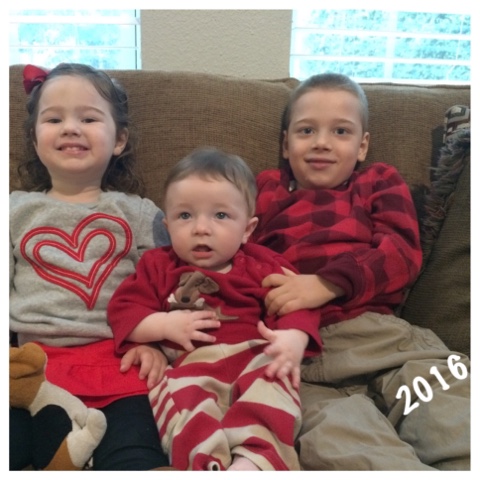 I just adore this trio- you think they’re related?!? 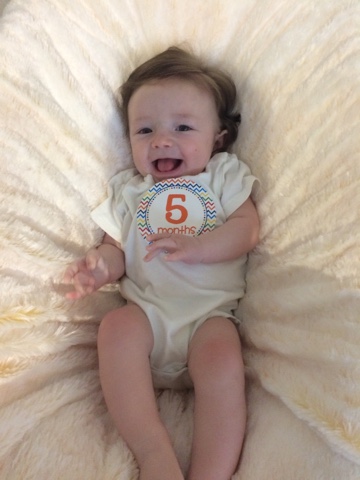 Dear Nolan,
I love that you were born on the 1st of the month, because every time you turn a new month, it’s like a fresh start. Today, you had a really good day. I can’t say your 4th month was my favorite- lots and lots of crying and trying to make you happy. I think I’m finally starting to figure you out: you need a routine, and lots and lots of rest/sleep at home. You’ve also been seeing the chiropractor. I’m finally seeing a happy, smiley baby for more than just a few fleeting moments at a time. Let’s hope this trend continues! 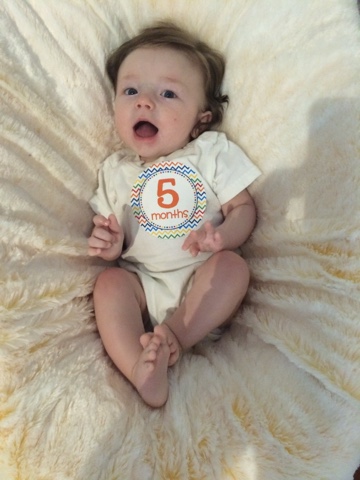 Nolan, at 5 months you:
– Weigh 13 pounds, 3 ounces
– Wear size 3 month and 3-6 month clothes, and size 1 diaper
– Take both breastmilk and formula, and have almost mastered holding your own bottle (!!!)
– Slept your crib for the first time last night and did great! You have been in the pack and play bassinet since you were born.
– Still sleep best when you are swaddled tight
– Go to bed about 5:30 pm. Wake 1-2 times at night to nurse, but go right back to sleep after. You wake up for the day at 6:00 am but are down for your first nap at 7:00. This has been a lifesaver for all of us.
-Have discovered your hands and they are constantly in your mouth. You suck your thumb occasionally.
-Are just beginning to grab for toys
-Need a haircut, but Daddy is going to need some convincing.
-Think your sister is the funniest and most amazing person ever, and you love your brother too. They both adore you.
-Have been left in the church nursery twice now and did well both times- yay! 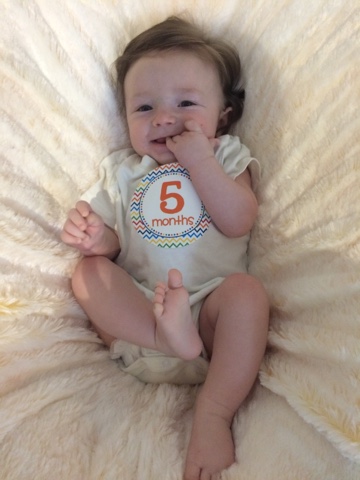 Sweet boy, I think we are going to make it. Our days are far from easy but I’m so glad you are mine. 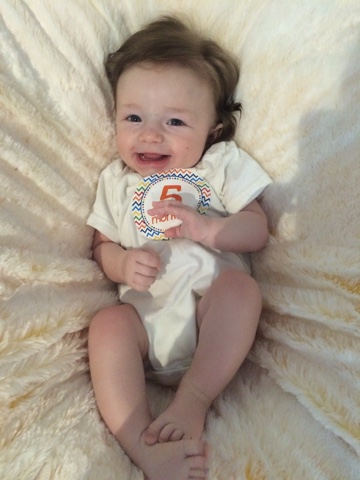 Grayson is sick. He’s been throwing up green bile and has been pretty miserable. We’ve been running Pedialyte through his tube all day and watching him closely for worsening symptoms. Normally, we would be in the ER, but are just waiting it out for now (and praying) because a hospital stay this week seems logistically impossible. But in reality, I’m giving it a 50/50 chance we’ll be there tomorrow.

Thanks a lot, January. Good riddance.
This month has been stressful. I spent the majority of my time and mental energy trying to figure out why my precious little baby, whose babyhood is so fleeting, was so damn unhappy most of the time. It seemed like his constant crying was the soundtrack to days where I was literally being pulled in three directions by three children who required their needs be met RIGHT NOW. And it felt like I bounced from one tiny person to the next, triaging their issues, but never really parenting any of them well. And every night, as soon as the third one was safe in her bed, I collapsed into mine, dead asleep most nights by 7:30.
I saw my doctor the other day about this- anxiety and possible depression. Apparently going to bed this early (and not wanting to do anything other than sleep) isn’t normal at 5 months post partum, and I’m still in the window where I can be diagnosed with PPD. And while I feel like I’m suffering more anxiety right now than depression, I’m being proactive in treating it. And I’m only putting this out there because I know a lot of people have such a hard time talking about it and don’t get the help they need (looking back, I absolutely had PPD after Grayson’s birth and traumatic first week of life, but felt shame and embarrassment and didn’t get the help I should have, ugh). This time though, I was honest with my doctor about what’s going on, and already feel so much better for being proactive about it.
Thankfully, Nolan seems to be (maybe) turning a corner. Thank God. I took him to the doctor a little over a week ago- our pediatrician wasn’t in, but after days of constant screaming I was desperate to see anyone who could help. The doctor we saw was the exact opposite of helpful. She was so fixated on the fact that Nolan hasn’t had any vaccines that she couldn’t seem to focus on anything I was saying about the actual reason I was there, which had absolutely nothing to do with contagious disease. And it didn’t help that the little toot was happy as a lark and smiling the entire time we were talking.
I left the doctor absolutely livid and with nothing but a copay, parking charges, and an unhappy baby. I immediately called the chiropractor who my friend had recommended. Long story short, my high maintenace little guy is now seeing the chiropractor three times a week. And while I didn’t see a miraculous change all of a sudden, he’s slowly but surely becoming more content and a much better napper. My A-ha moment of the week has been the 7:00 am nap. Nolan normally wakes up around 5:45 and we come downstairs about 6:00, when Grayson’s nurse leaves. For weeks (months?) I’ve been incredibly stressed trying to get everyone fed, dressed and out the door, all while Nolan cried nonstop. But the last four mornings, I’ve nursed him when he’s woken up at 6:00 then given him a bottle and put him down for a nap at 7:00, and he’s slept for at least an hour and a half every time! I’ve also been more diligent about putting him down for naps throughout the day at approximately the same time. I’m realizing that this little baby requires much more scheduling and structure to his day than my other two did, which isn’t really in his job description as the third child. He’s not really a “go with the flow” kind of guy, and it’s forcing me to drastically change how we do our days. For five years, I’ve gotten out of the house almost every day, and now, for this season and this child, I don’t think I’m going to be able to do that. This is causing me some anxiety and guilt because I feel like Charlotte is going to be missing out some, but we will make it. And slowing down and spending more time at home probably is a good thing for me.
I just wish “home” wasn’t here. After three months on the market, our house hasn’t sold. We are in such limbo- our current house is not working for our family’s needs for so many reasons, we have to keep it show-ready, and yet we still have to live here. And I just don’t think I’m doing a very good job most days of balancing it all- living in the present and yet planning for what we think our future is going to look like.
All this to say, I’m glad January is on its way out. I still have such high hopes for 2016- bigger and better things for everyone in my family- and I hope those things start to happen in February. Tomorrow is a new day!