I’ll be 16 weeks tomorrow- how is that even possible? Last Thursday, my doctor made sure I still didn’t want to know the sex of this baby, because she could have told me that day. What? How am I already at that point? And no, I didn’t want to know- being surprised with Charlotte was one of the best moments of my life, and I can’t wait to be surprised again.

Of course, when I stop to think about it, the last 3 months have actually been really, really long and incredibly difficult. I’ve just been so sick, so tired, and so hungry. I’ve already gained about 8-10 pounds because eating is the only thing that really gives me relief from the nausea and (duh) hunger- well, that an Zo.fran that I finally started taking regularly. Praise God for Zo.fran.
I am feeling better overall- I’ve actually been ok during the day most days and even in the mornings as long as I eat something pretty filling in the middle of the night (so annoying). I still hit a wall of exhaustion about 3:00 every afternnoon- usually about the time I pick Grayson up from school. Then the nausea usually hits about 5:00 and I feel pretty sick until I fall asleep (early).
Although I definitely have a bump, I’m still in regular clothes and am trying to wait until I get bigger to get maternity clothes- when I was pregnant with Grayson during the spring/summer I was still working and needed different type clothing than I will this time, when I’ll be chasing a toddler and recovering Grayson from surgery (we scheduled his surgery for early May, by the way).
The baby causing all these shenanigans is apparently doing great; I had an ultrasound Thursday and he/she was wiggling like crazy and still right on track for growth. I’ve felt movement a handful of times- each time completely obvious what it was, but I’m not feeling kicks regularly yet. I have round ligament cramps all day long and some of them are really painful- the nice thing about a third pregnancy is with things like that, I know they are completely normal and don’t worry a bit about them- they are just annoying, not worrisome.
I’m so thankful to be in the second trimester and that everything seems to be great with this baby. Of course, we are always praying for a healthy baby and that he/she continues to develop normally. And I’m definitely not wishing this pregnancy to fly by- I have a lot to do and get orgnanized before we become a family of 5!
Advertisement 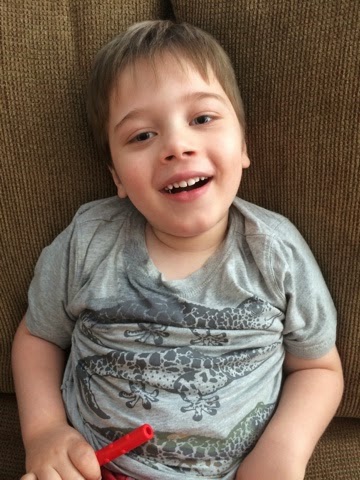 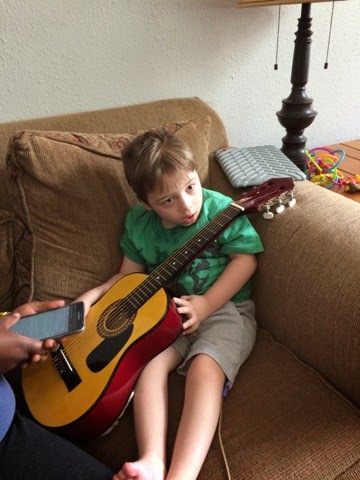 You have such a softness and gentleness about you. Your hands and feet are always warm, and so, so soft. 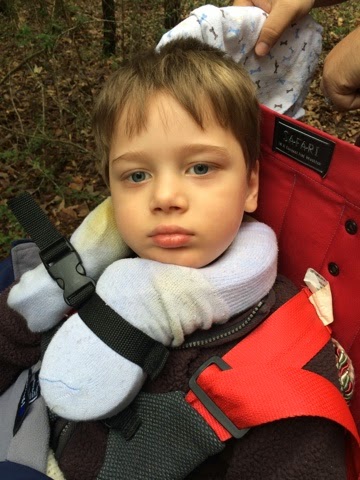 The sweetness of your face reminds me to slow down to love and cuddle you just a little longer. 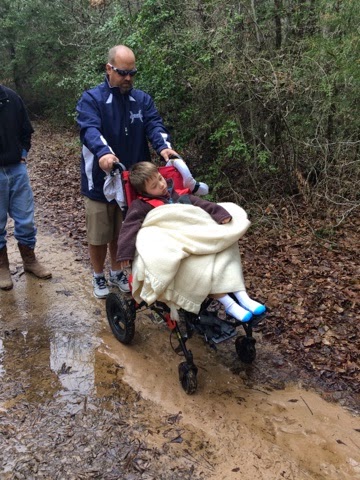 We try to include you in whatever we can, even if that means pushing you through the mud. You love being outside; it calms you. 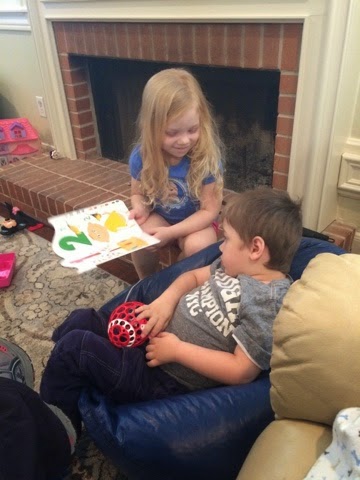 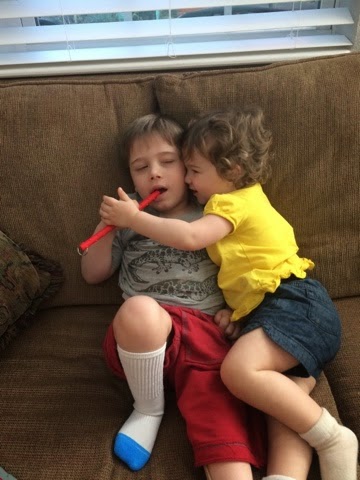 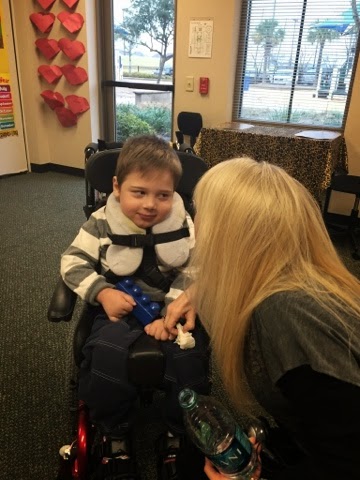 You have so many people, both children and adults, who love you and try to make you happy however they can. 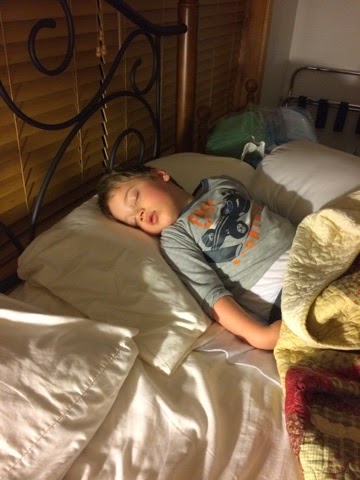 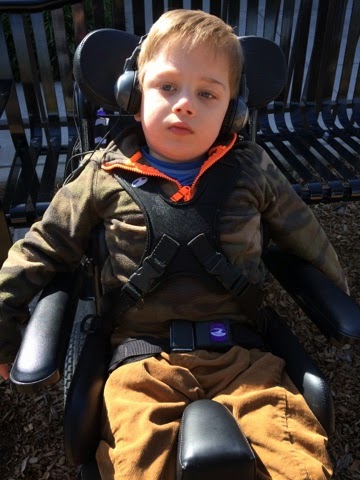 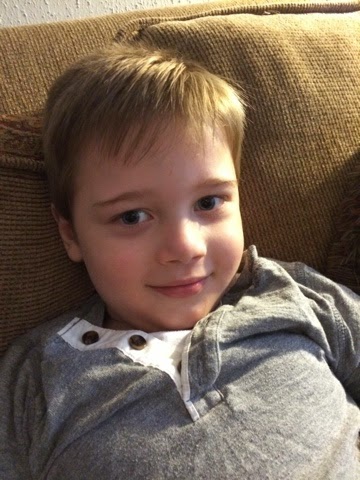 Yesterday we saw Grayson’s Mito doctor to discuss whether or not we should move forward with hip reconstruction surgery. I was fully expecting Dr. K to make the decision for us- to tell me definitively yes, he needs this, or no, it’s too risky. After waiting 2 hours past our appointment time before we saw her, I was exhausted, starving, and ready for answers.

Unfortunately, we aren’t off the decision-making hook. Dr. K said she was there to give us all the medical information she could talk us through the benefits and risks, but ultimately, the decision is Ryan’s and mine. No pressure or anything.
Except, yeah, unbelievable pressure. As I said before, both options have terrible aspects to them. There are many days where I don’t even feel like a grown-up, and yet am having to make crucial medical decisions for a child who has no voice. Decisions that will significantly impact his future and either way will cause him pain.
If we do the surgery, we are looking at a few really rough months. Dr. K described orthopedic surgery as “nasty” and said, “Think about how bad you think it’s going to be. It’s going to be worse than that.” But once we make it over the hump (she estimates full recovery/back to baseline in about 6 months) he should be ok and hopefully hip pain won’t be a concern. She talked to a palliative care doctor about Grayson and asked how they manage pain in kids with chronic hip pain. Narcotics. I made a face at that word and she said she agreed with me. We already have enough trouble getting G to “connect” with us, and we both fear narcotics would steal even more of his personality. And at this point, we have every reason to believe that Grayson has years to live, and we want him as fully present as possible for however long we have with him.
This morning, I called the surgeon’s office and let them know we want to schedule the surgery. We still aren’t 100% sure this is the right decision, but I don’t think we ever will know for sure until after we do it. And it may be that there isn’t a right or wrong decision- we just have to do what we think is best for Grayson based on the information we have now.
Thank you to everyone who has prayed for us, commented, and been so supportive the past few weeks as we’ve agonized over this. We appreciate you so, so much.

I think one of the hardest things about raising a kid with medical issues is making decisions for his care that have risks, unknowns, and no real “good” options.

We saw an orthopedic surgeon this morning about Grayson’s dislocated hip. He had an X-ray done to see the current state of his hips, since the one we saw last week at the PM&R doctor was taken in December. His right hip is in fact completely dislocated (and by the reaction of the doctor as soon as he pulled up the image, it’s bad) and the left one is well on its way to dislocating as well. He said the left hip’s dislocation is “inevitable” in the next few months if we do nothing.
We have 2 options: Do nothing or do hip reconstruction surgery. Obviously, both options have pros and cons, but tonight, neither of them feel like good options. I’m really stressed and this whole situation seems somewhat bleak.
If we do nothing, the pro is we avoid surgery, and the risks that come with it. Thankfully, nothing we do or don’t do as far as handling him will make this any worse. And Grayson will never walk, so dislocated hips won’t have any bearing on how he gets around. Also, although we think they are making him somewhat uncomfortable, we don’t think this is causing him severe pain- yet. So if we don’t put him through surgery, at least we know that at this moment in time, he isn’t in pain.
The downside to doing nothing is that most likely, at some point his hips will cause him significant pain. There is a window of time where his hips can be “fixed” due to growth and development of the bones and muscles. So if we do decide to do the surgery, it needs to be relatively soon. If we gamble and wait, and then in a few years he starts to have severe pain, the surgery would not be able to put the hips back in socket, but would actually be to remove the part of the bone causing the pain. So basically if we want his hips intact for the rest of his life, it needs to happen soon.
If we decide to do the surgery, there’s an 80% liklihood that the hips won’t dislocate again and cause pain, although they will be closely monitored forever. We’ve caught this early enough that we’re still in the window where it can be fixed, which is huge.
The surgery comes with huge risks. It’s at least a 4 hour surgery- there would be two surgeons, one on each hip. This means 4 hours of anesthesia, which is a HUGE concern for a kid with a progressive neurological disease. Grayson would be in the hospital about 5 days, and most likely spend some time in the PICU. And with Grayson being medically fragile, there’s probably no way to predict what complications could arise. Then he would be in a cast for about 6 weeks, which logistically sounds like a nightmare to me.
As we were walking in the lobby of the building on the way to the appointment, we happened to run into Dr. K, Grayson’s Mito specialist/neurologist. We briefly filled her in and she said to email her after the appointment. I did, and her nurse emailed me back a few hours later saying Dr. K wants to meet with me in two weeks to discuss the options. Since the Mito/neurological component is such a huge factor, I’m so glad I’ll have a chance to talk this over with her.
I guess this decision is going to have to wait at least two more weeks, and I’m going to try not to go crazy obsessing over it. Sometimes I just get so angry about how unfair Grayson’s life is. He’s the sweetest little guy ever, and his body just keeps betraying him. I just pray that whatever we decide is the best decision for him, and his precious life.