Here we are, two weeks post-surgery. I’m glad that two doctors warned me about how tough this was going to be, because I really believe I’ve been able to manage my expectations and emotions really well because I had a realistic picture going into this.

What I hadn’t really realized- this would be my last time to hold Grayson for about 6 weeks (sad face): 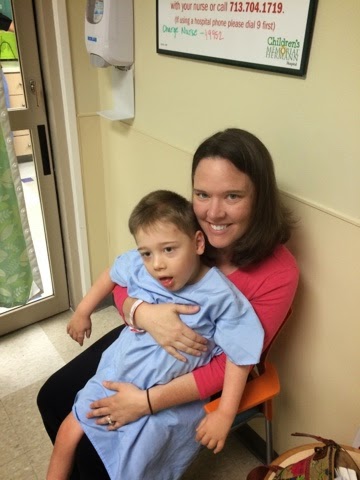 The actual surgery went perfectly. The morning of May 5, we had to be at the hospital at 5:30 am (yawn). After much discussion between multiple doctors about anesthesia, consent forms to be signed, and whatever else takes so long to get these things started, the actual surgery didn’t begin until 9:45. We got several updates during the 5 hour surgery and each time it was reported that things were going really well. The surgeons were able to do the hips as well as reconstruct the pelvis, and Grayson did NOT have to be put in a spica cast. This was all fantastic news and what we’d been praying for.
Late that afternoon, we finally were brought to the PACU to see Grayson. Thankfully, since he was being sent to the PICU for the night, we didn’t have to wait for him to wake up. He did briefly open his eyes and cry for a minute, but that was it: 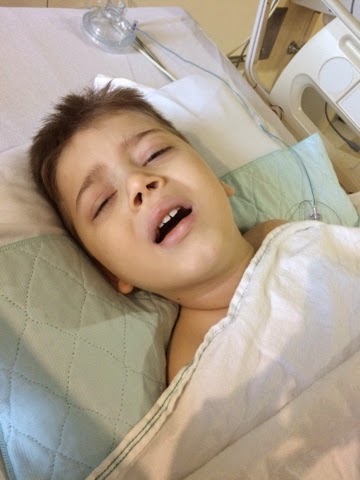 The first night was probably the hardest, although the days and nights of the next week completely ran together. Grayson was in a lot of pain and required morphine almost every hour through his IV. He had an epidural that stayed in until Saturday morning, but it didn’t do enough to stop him from hurting. Thankfully, he was cathed until Friday so I had a few days where I didn’t have to change his diaper, which is what I was most worried about.

We stayed in the PICU until Wednesday night, and were moved to a monitored room on the same floor. I went home to sleep and see Charlotte that night and Ryan stayed with Grayson. Early Thursday morning I went back to the hospital so Ryan could go to work. Because of all the pain medicine, Grayson basically slept for about 4 days straight, which was fine with everyone. He would wake up crying every few hours, get pain meds, and fall back asleep. A few days later, he finally would stay awake for a few hours at a time and started enjoying his Veggie Tales again: 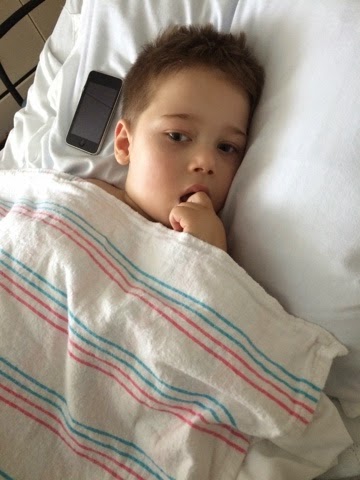 By Friday, the surgeon was ready to let us go home, but I knew we were nowhere ready for that. Grayson still had the epidural, was requiring way too much IV pain medication, and I still, after days of asking, had no answer on how we were supposed to get him home, transport him for the next 6 weeks (his wheelchair wouldn’t work) and if we were going to get additional nursing hours. I was SO stressed about this because by this time we were having to change diapers and it took 2, sometimes 3 people to do it- along with a hurting and crying little boy. I had no idea how I would do it without extra help.
Saturday, a physical therapist came by with the type of wheelchair we needed to get to use at home. She helped teach me how to pick G up without hurting him or myself and transfer him to the chair, which is really like a bed on wheels. Then Grayson and I took a walk around the floor- it was SO nice to be out of the hospital room, and G loved it: 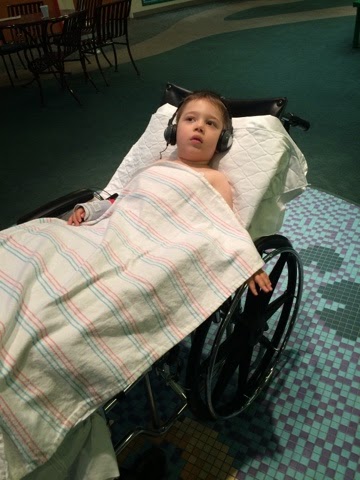 Sunday, Grayson was moved again- this time down a floor that services kids recovering from trauma and/or surgery. The nurses there brought us what was supposed to be our way of getting him home. It was a seatbelt type strap that went over his whole body and was meant to use in the back seat with the child laying down flat. I had some major problems with this. We have a minivan, and in the middle are captains chairs. The only flat seat we have is in the very back. I could not fathom how I was going to carry this fragile child up the step, into the very back of the van and lay him down without again, hurting him or myself. Also, the whole thing didn’t seem safe AT ALL. And they told me honestly that it’s purpose was for transporting only in absolutely necessary situations, because it isn’t nearly as safe as a carseat. Big problem for me. So I quickly nixed that idea and set out to find a carseat that would work. Thanks to the power of social media, within hours, I had found a carseat to borrow! I haven’t yet met the sweet woman who loaned us the seat, but she has been so incredibly kind and encouraging (her son was in a spica cast so she totally gets it) and I am so thankful for the amazingly wonderful people in this world! This setup is much safer and more comfortable than the craziness the hospital was offering: 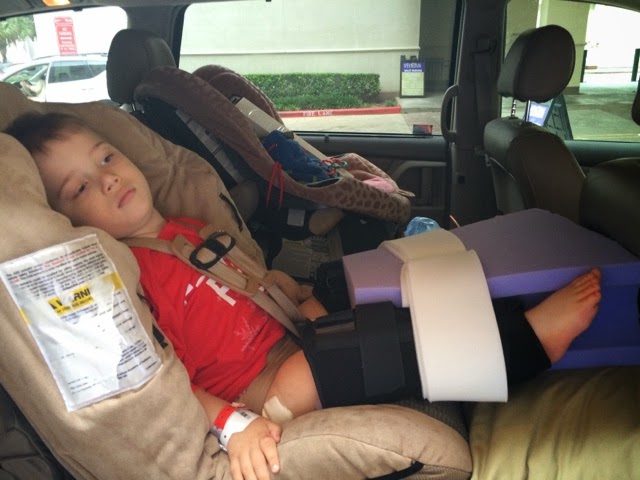 We ended up going home Tuesday, a week after surgery. Insurance hadn’t made a decision on whether or not to cover the wheelchair G needs (and as of today, they still haven’t- grrr) so I ended up just renting one. Unfortunately, we weren’t able to get any additional nursing hours, but it’s worked out so far. Our incredibly kind and generous nurse moved in Tuesday afternoon when we got home and didn’t leave until Saturday night! She loves G so much and takes such awesome care of him.
We’ve been home a week now, and are surviving. The most difficult part has been pain management and keeping G comfortable and entertained. That part is so hard because there is so little he likes to do- Veggie Tales, some YouTube videos, and playing his guitar is about it. It’s really hard not to be able to hold and cuddle him. Diaper changes are not nearly as hard as I had feared- I can do them by myself now and think I’m getting better at it every change. Grayson is still needing pain medication every 6 hours and definitely let’s us know when he needs it! I really hope we are able to cut back on the medicaiton soon because I hate that I’m having to give him so much. 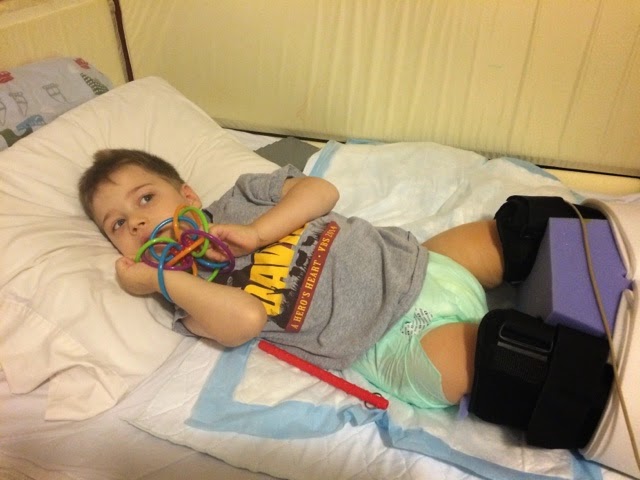 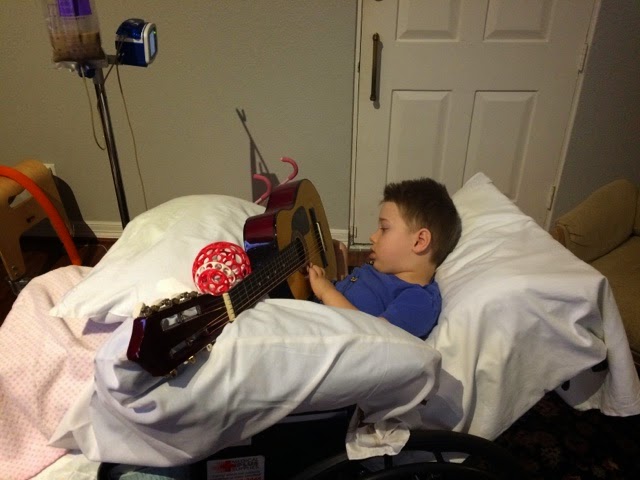 We had a follow-up with the surgeon yesteray- we were certainly a sight rolling into the office with a bed on wheels! The surgeon said everything looks great; he adjusted the braces and pillow and removed the bandages from the incision sites- G is certainly going to have some impressive scars! We go back in a month and hopefully will be able to remove the braces and pillows then.

I took a picture of the before and after side-by-side x-rays at the appointment- “after” is on the top left. Look at all that hardware! If you look at the pictures on the right, you can really tell how badly dislocated G’s right hip was prior to surgery. 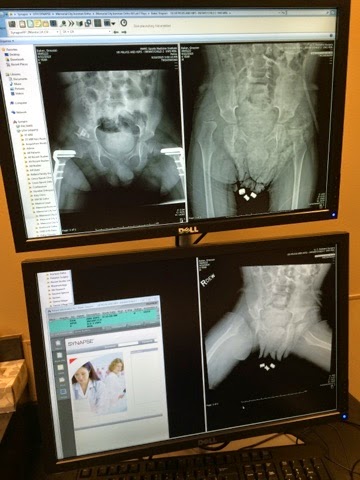 This kid is my hero, and the toughest person I know. I am so, so thankful that although it hasn’t been fun and we have a long road ahead, Grayson is doing as well as we could expect at this point. 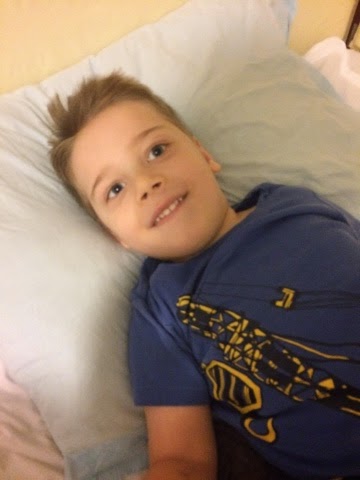 I apologize for not updating here in weeks, and for leaving some of you hanging who have been so supportive of our decision to go through with Grayson’s hip surgery. His surgery was ten days ago, and yes, things have been incredibly hard and exhausting, but also have been best case scenario in almost every aspect. I promise I will write an detailed update of the surgery and how his recovery is progressing, but tonight just isn’t the night. Tonight is the night to fall into bed at 7:15 and catch up on TV that I’ve missed over the past week and a half.

Again, thank you for your words of encouragement, prayers, and support. We are here, surviving. And even smiling some. 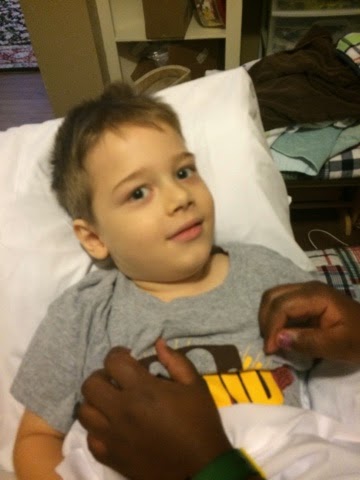