After 15 months of anticipation, I saw Hamilton on Tuesday! The traveling tour is in Houston for the next month, and my parents got tickets and were gracious to ask me and my sister, along with her husband and my mom’s friend, to be their guests.

I’ve been listening to the soundtrack for the past 22 months almost daily, and know almost every word. The only time I’ve ever sang karaoke in my life was last August when a good friend and I went to a Hamilton Karaoke event. I still maintain it was one of my highlights of 2017. I’ve heard from friends and strangers who have seen it on Broadway or in their cities, and knew it would live up to all my expectations of awesomeness. And of course, it did. But going in, I thought I had reached the pinnacle of my love for Hamilton, after listening to it, reading about it, and counting down the months, then days, then hours until I sat in that theater and heard the familiar opening notes of the first song. But I was wrong. I love it and appreciate it even more now. 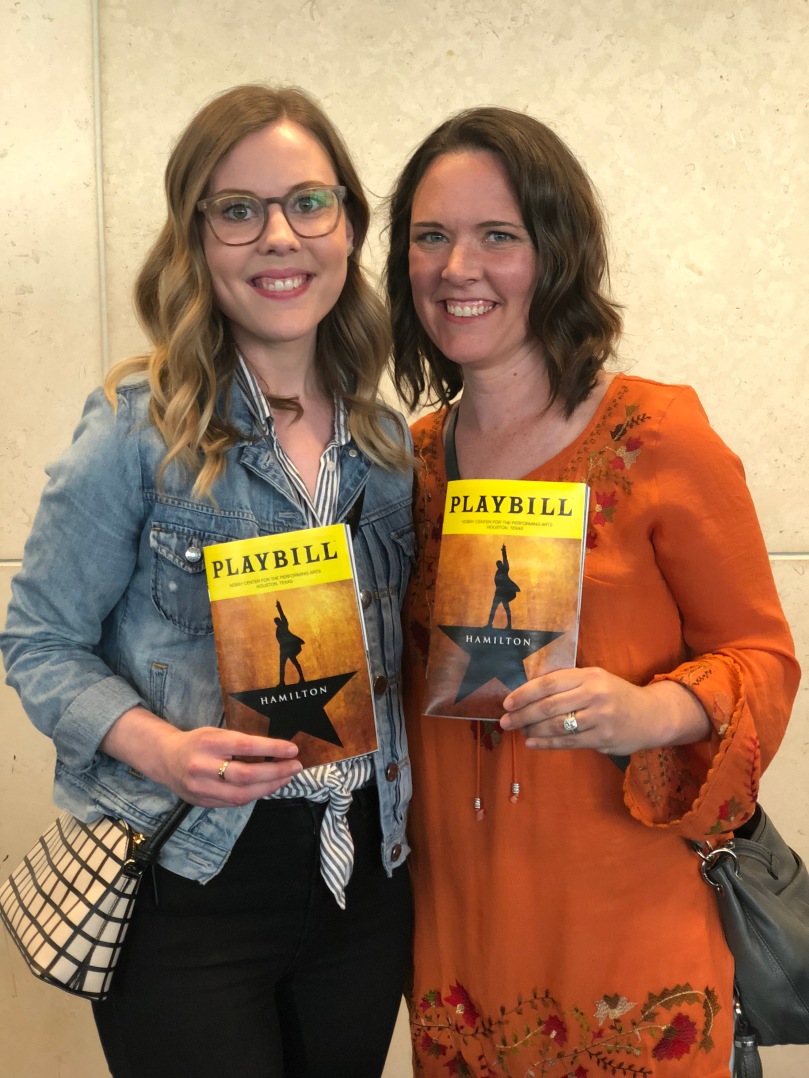 Seeing Hamilton live, of course I was blown away by the music, the talent of the performers, and the choreography. But it was so much more than that. I’ve been thinking a lot over the past few days about what else makes this particular show such a masterpiece.

The Humor: There are so many genuinely funny lines and characters, and you just don’t get the full effect and timing of the humor just listening to the soundtrack. Of course, King George steals the show in his scenes and he opens the whole show talking to the audience and welcoming them to “My Show”. But Thomas Jefferson had me laughing almost every time he opened his mouth- his timing, facial expressions and the inflection in his voice just slayed me.

The Humanity: I have so much love for John Laurens after seeing Hamilton onstage. There’s one scene in the show that isn’t in the soundtrack, and it brings me to tears thinking about it (probably because it comes right after “Dear Theodosia”, which always makes me cry anyway). And also, every scene with George Washington gave me such compassion for him and the enormous weight that was on his shoulders in leading a brand new country. And the version of “Burn” in this show was the most raw and emotional performance I’ve ever seen- Eliza’s pain and anger was tangible. Every character is so dynamic, and human. There are no absolute heroes or villains in Hamilton.

The Writing: One thing I have always loved about the character of Alexander Hamilton is his obsession with writing, and how he used his writing to literally change the world. It’s just so inspiring to me. The show really emphasizes this, both in the lyrics and the actual performance. There’s a lot of letters, and writing scenes, and paper (paper flying, paper burning, paper being collected). Why do you write like you need it to survive? Because I do.

The past few days, I’ve been kind of sad- sad because I’ve never loved a piece of art like this, and I’ll never see Hamilton again for the first time. I’m going again in a few weeks with my friend, and I know it will be just as incredible. But I’ll probably be sad after it again, because who knows when the next time will be.

Lin-Manuel Miranda, as he often does, inspired me with a tweet this morning. I’m going to take his advice…let’s go. 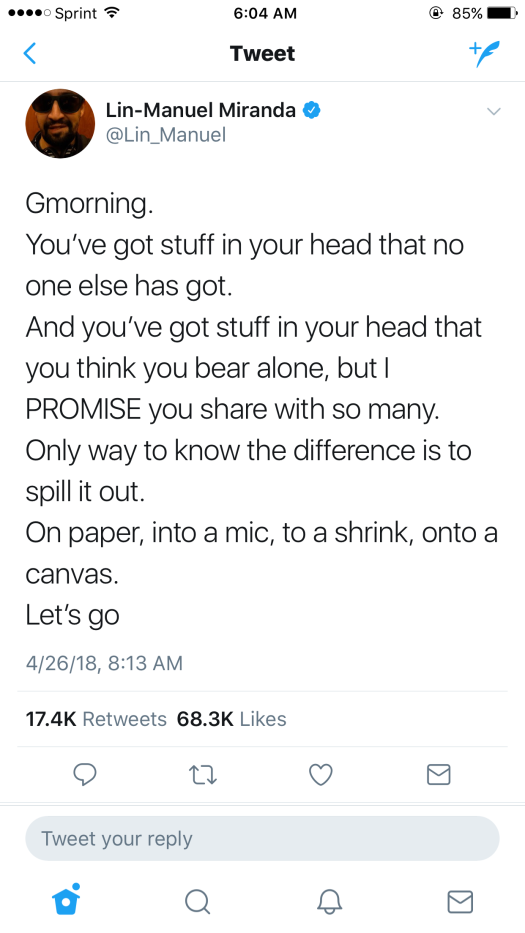 Yesterday, I nervously walked into a church for the first time in many, many months. Sunday mornings have become my refuge, my only time of the week that I am truly alone. I love people, and especially my people, but too much consecutive time with people makes me twitchy. As an introvert who doesn’t like to feel needed all the time, I feel a constant tension. It’s a pull between passionately loving my children who feel like an extension of my heart and body, and the internal voice that screams LEAVE ME ALONE!!! when I reach my limit. So for the better part of a year, my Sunday mornings have been about solitude: writing, reading, sipping hot (not re-heated) coffee while being still, and occasionally listening to a sermon podcast while folding laundry. All things I think Jesus would approve of, by the way.

But still, I miss church. I miss the routine of it, the familiarity of hymn and scriptures being read aloud, and the sense of community. I’ve been so hesitant to “go back” though, because really, I don’t have anywhere to go back to. My physical distance, as well as my theology, has shifted since I was going to church regularly. I find myself longing for the church style of my childhood, which may just be a longing for nostalgia of a simpler time- the hymns, the organ, the doxology and benediction. And for some time, I’ve desired to be at a church with women leading worship- I’ve been at churches for so long where such is forbidden, and I long to be somewhere where that is not the case.

So somehow, maybe through divine intervention, yesterday I walked into the little Presbyterian church I attended in my preschool years. While I don’t remember specifics from that time, except for one anxiety-inducing Noah’s ark performance where 5 or 6 year old me was cast as a turtle and told to shake my bottom (nope), the sanctuary felt familiar. At the time, my mom was the choir director at this church, and yesterday as the choir sang, I pictured her leading the choir in their long robes (I haven’t seen choir robes at church in forever!). The people were so kind and welcoming, and the predictability and familiarity of the service was peaceful.

Part of the sermon was on doubt, and the legitimacy of questioning, and doubting. I appreciated this because of where I am right now. I never ever thought I would struggle so much with doubt at this point in my life- doubt about what I believe as well as how to continue on as a “doubt filled believer” as Rachel Held Evans puts it. I’ve seen memes posted berating people for leaving the church because the church is full of hypocrites. I don’t think this is why most people leave the church- it’s not why I left. I left not because of hypocrisy, but because of theology. I don’t want to pour my life into a place that doesn’t affirm women in leadership, or LGBT inclusion, or speak out publicly and loudly about issues like racism, the refugee crisis, or violence. I don’t want to attend church where Biblical issues aren’t nuanced and different interpretations of scripture aren’t welcomed for discussion.

I don’t know where my spiritual and church life is headed, or if I’ll go back to that little church. I’m trying to give myself the grace that Jesus has given me. I know he is patient, and faithful in this painful, yet hopeful process.

Hey Christians- you do know they think we’re assholes, right? Yes, they: the rest of the people in this country just trying to live their lives, but who are constantly berated because their lifestyle, political views, or religion don’t fit in the box labeled “Christian”. They want nothing to do with a belief system that preaches love thy neighbor, but in practice, only if that neighbor looks like us, lives like us, agrees with us and worships the same God as we do.

Franklin Graham, one of the loudest and most recognized evangelical voices and unapologetic Trump supporters, boldly declared on Thursday that someone with a “progressive” label cannot also wear the label of Christian. 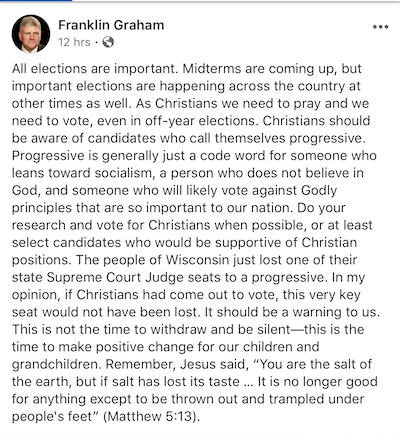 I’m a Christian. For my entire life, I have been taught a Christian is a person who accepts the gift of grace given to to them by Jesus’ sacrificial death and resurrection, and therefore lives their life according to the teachings of Jesus.

Did I miss something? Is there a verse in the Bible that voids my ticket to Heaven if I vote for a “Progressive”? Maybe it’s in Two Corinthians; I need to check.

But seriously, I consider myself progressive and vote for progressive candidates not despite being a Christian, but because of it.

I vote for politically Pro-Choice candidates because protecting life should be about so much more than being pro-birth. How is criminally punishing a woman because of a choice she made for her body spreading the good news of Jesus and his message of forgiveness and mercy?

I vote for candidates in favor of healthcare for all, because of Jesus’ example of healing the sick and disabled, and touching and ministering to lepers. How is denying human beings lifesaving and preventative medical care simply because of their inability to pay in line with what Jesus would do?

I vote for candidates in favor of common sense gun laws and regulations, because Jesus said Blessed are the Peacemakers. Jesus never said to arm yourself with an assault weapon thats only purpose is to kill.

I do not vote for candidates just because they are Christian, because Christians aren’t the only people who do good and make positive change in this country. Jesus himself told the story of The Good Samaritan, and spoiler alert, it wasn’t the religious leaders who were the good guys.

If calling myself a Progressive gets me kicked out of the Christian Club, then consider this my resignation. I am fed up with professed Christ-followers using Jesus and their moral beliefs to continue the toxic othering of their neighbors.

I have to believe that although Franklin Graham may be one of the loudest (and most obnoxious) “Christian” voices spouting off the nonsense that Progressive and Christian are mutually exclusive, there are plenty of people shouting just the opposite. May our voices collectively drown out all the bigotry, exclusiveness and falsities that are ruining the reputation of Jesus Christ.

Come on Christians, let’s not be assholes anymore.