In case you haven’t heard, we got a little rain down here in Houston Sunday night. It was a fantastic storm whose thunder (and the flash flood alarms on our phones) kept us up all night and caused a little girl to crawl into bed with me for the first time ever in the wee hours of the morning. Thankfully, our house was fine, but our brand new tree got uprooted and fell over in the yard. Many, many Houstonians weren’t so lucky and are dealing with flooded homes and cars and lost possessions. Grayson’s school flooded AGAIN but mercifully was able to reopen today. Due to high water in our area, we didn’t leave the house all day Monday or Tuesday, and only got out for about an hour today to pick up some new shoes at the mall for Grayson and Charlotte. Both of them, and Ryan, will go back to school tomorrow, which will be nice. We’ve had a lot of togetherness the past few days.

Anyway, I’ve been wanting to do a post on things I’m currently loving, and thought a rainy week when I’m low on patience would be a good time to share some happiness.

1. My first post on Houston Moms Blog is up today! I am so excited to be a part of this talented group of ladies and have really enjoyed getting to know them all. And I love seeing my writing published and shared for a larger audience. Thank you to all who shared this post today- I wrote it hoping it will help people know how to help their kids engage with special needs kids.

2. Playing outside. I am not much of a sit on the floor and play pretend birthday party with 100 stuffed animals enthusiast, but want to ride bikes, throw a ball around or go down the twisty slide ten times in a row? I’m in. Every day, I beg Charlotte to go outside and ride scooters with me in the cul de sac (she would rather play said pretend birthday party). I seriously could ride scooters for hours. I am forever 10 years old. 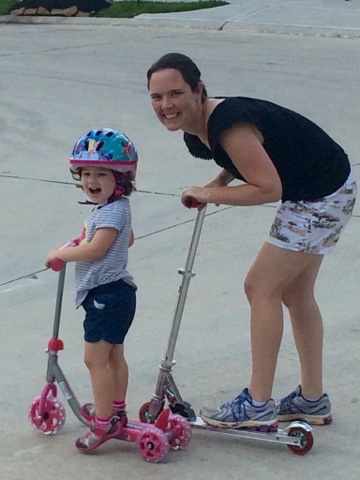 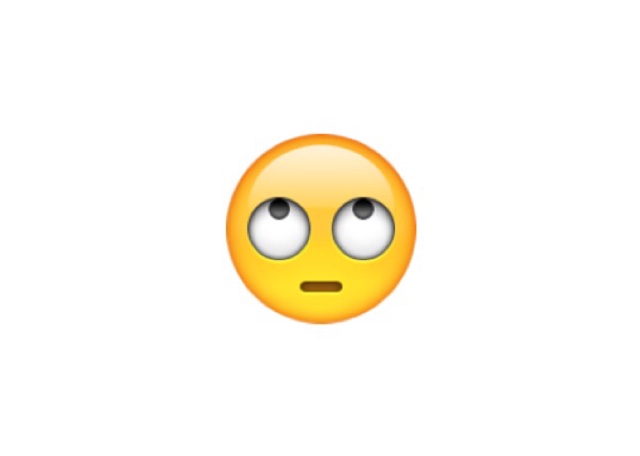 4. This mascara. A few months ago, I heard Jamie Ivey talk about this “tube mascara” that doesn’t smudge at all, and I SO wanted to buy it, but just couldn’t justify $31 for mascara. I have a huge problem with mascara running all over my face and usually just don’t wear it at all because I don’t want to deal with looking like a raccoon 5 minutes after I walk out the door. But then I found this one for about 1/4 the price and am happy to report I like it- and I’ve had minimal smudging. And the best part is the little “tubes” just wash right off!

5. The Popcast. I’d like to add this show to my list of favorite podcasts. The hosts have great chemistry and are just generally HILARIOUS.

What are you loving these days?

We’ve had an unfortunate situation unfold over the past two weeks and I’m just a mess of emotions: super angry (livid and furious at times) and embarrassed, but mostly just heartbroken. I fixture in our family’s life, and especially Grayson’s, is gone, and the way it happened was honestly shocking and hurtful.

So, that being said, we are searching for another nurse for G.  We have a nurse in our home five nights a week for a total of 60 hours. That’s a lot of time to have someone in my home, especially a stranger. It’s just annoying and uncomfortable to start this process over again to try to find the right fit for G and for our family. And I do realize what we’ve had is super uncommon- having one nurse for three years-but I miss it. And although I’m hurt and angry about what happened, I miss having her around. We considered her part of our family and she knew it.

We are trying out a FIFTH new nurse tonight. We actually had a great one for two months but when we moved the drive was just too far for her. The one who is here tonight is actually great so far, so maybe she will be a good fit. I hope so.

I keep thinking about Grayson in this crazy situation- how confused he must be. He adored his nurse, and one day she was gone. And since then, he’s moved to a brand new house and there’s been a parade of strangers taking care of him at night. I often wonder how much he remembers and processes.

I registered Grayson for Kindergarten this morning. SO STRANGE. It wasn’t emotional at all, like most people talk about. And I think it’s because for me it doesn’t feel like I’m really registering him for Kindergarten. He won’t be in a Kindergarten classroom, and may or may not even be at the school I registered him at, which is in our neighborhood. But even though I don’t have the touchy-feely emotions about this milestone, I am excited for him. We will miss his current school terribly, but I’m feeling hopeful that this change will be a great thing for him.

I was thinking back today about how much I used to write about the details of Grayson’s days, and I just don’t do that much anymore. And honestly, it’s because there’s not that much to write about right now. G is stable, and is definitely my easiest kid to take care of at this point. He still loves his Veggie Tales, hanging out in his beanbag chair, and just being loved. He reminds me to slow down and calm down. And I know we will find the right nurse for him, hopefully soon. 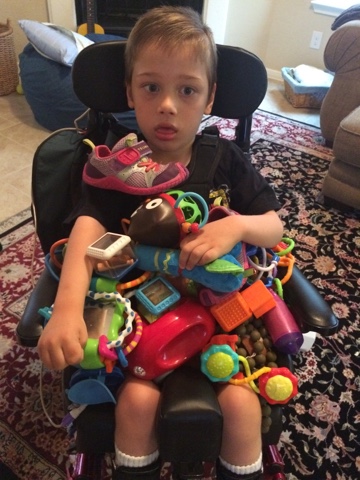 Well, we moved a week ago! We are back in Katy, and are so, so grateful and happy. In just a week, I have realized just how unhappy I was in our old house. Not to sound ungrateful, because so many have so much less, but it just wasn’t a good place for our family. Now, we have a big backyard, play room for the kids, and everyone has their own room. Amazing. Last week, we had this installed. Charlotte was having a hard time with leaving her “brown house” so we let her name it. I give you…Pony Park. Worth.Every.Penny. (And it was a lot of pennies). 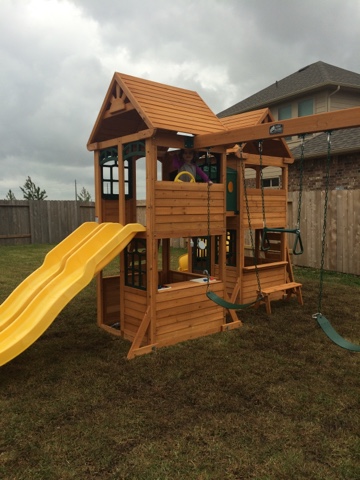 This is the perfect time of year to hang outside, and we are making up for the last 3 years not having any outdoor space. 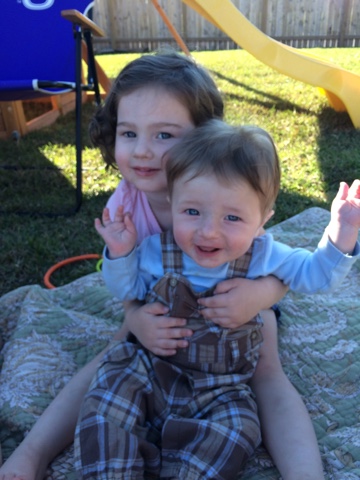 Speaking of the backyard, we met with some volunteers from Make A Wish Foundation yesterday because Grayson is eligible for a Wish. We’ve considered his Wish for a long time now, and since he can’t verbally wish for anything, we have to request for him. A dream vacation would have been amazing, but we weren’t sure how amazing it would be for him. So instead, we thought about what he really loves, which is being with his family and being outside. So we wished for a covered space for him in the backyard where he can be close to us, but still out of the heat. I’m really excited to see what Grayson receives. He deserves it. 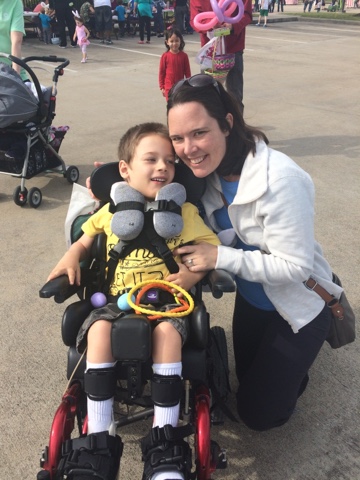 This move has been 99% positive and such a great thing for our family, but we are incredibly sad and somewhat anxious that Grayson won’t be attending the Caroline School next year. He’s been at the school for four years now, and we adore the school, his teachers, and his therapists. But, it’s just too far for me to keep making the drive day after day. It was too far from our old house and it’s WAY too far from the new one. Right now, the plan is to try public school next year (he’ll be in kindergarten…what??!). To be honest, I’m incredibly nervous about this, but I’m praying for some incredible teachers and for G to thrive in his new school.

Charlotte will also be attending a new preschool next year, but I’m not so much worried about her transition. She loves any type of “school” environment and I think she will be just fine. We are still really struggling with her attitude towards Grayson. It did get better for a few weeks, but she’s back to her old antics. None of my tactics are working, so after consulting with my counselor, I’ve decided to get some professional help for her. I meet with a play therapist this week and I’m assuming Charlotte will start seeing her after that. 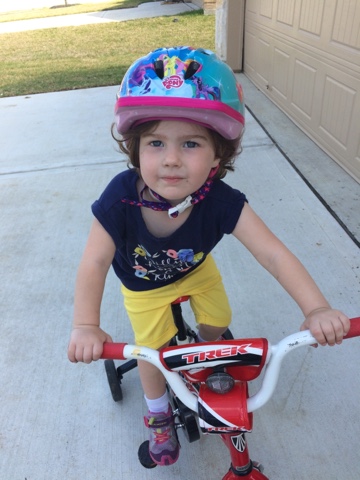 I’m super excited that a few weeks ago, I was asked to be a contributor for Houston Moms Blog! I love to write, and this is an opportunity to write for a larger audience as well as collaborate with other amazing moms in this city. I’ll be sure to link here when I have a post published!

Big changes happening, but most of them good and a positive step forward for our family. I’m looking forward to life slowing down some, and lots of afternoons spent outside with these little people! 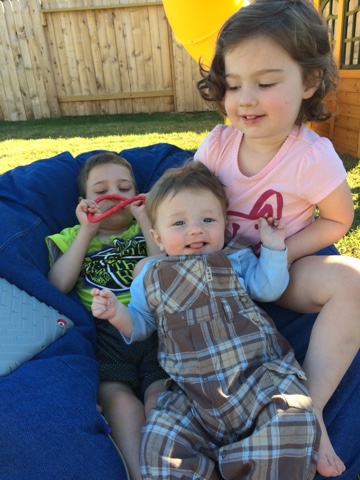 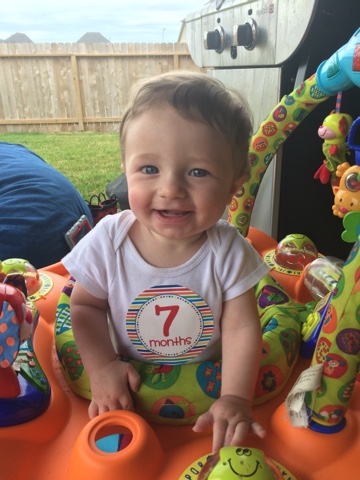 Dear Nolan,
Today you are 7 months old. Although you are still a relatively needy baby, with each passing day you seem to get happier and more easy-going. Your grin just lights up the room and melts my heart, and I really think we are about to hit the sweet spot of your babyhood. 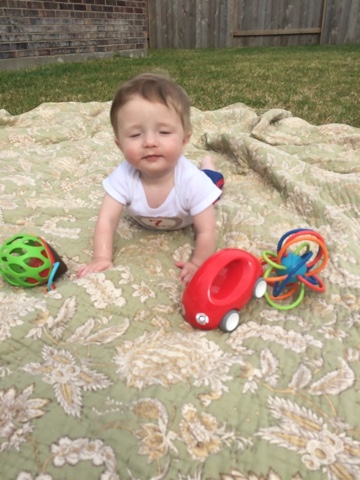 You’ve had some big changes these past few weeks, the biggest being a brand new house! You are finally out of Mommy and Daddy’s room (hooray!) and sleeping in your own room. We have a big backyard, and we’ve already spent a chunk of time hanging out on the patio and a blanket on the grass. I am so looking forward to watching you grow up here, in the bedroom next to Grayson. 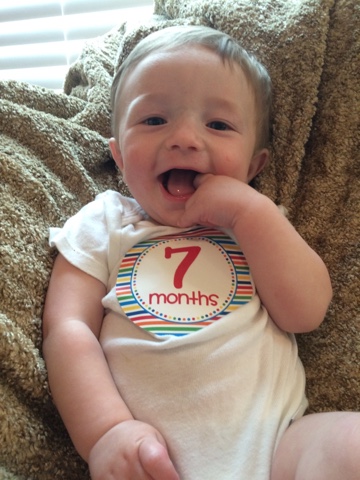 Nolan, at 7 months old you:

Oh baby boy, gosh I love you so much. Happy 7 months! 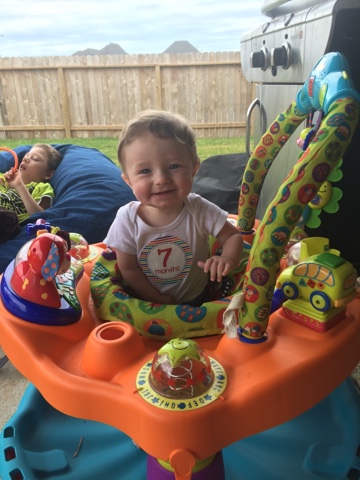