I watched you playing in the backyard today, giggling without a care as you soaked each other with the hose. Mercifully, you are oblivious to the turmoil and heaviness that hangs over our country today. At four and almost two years old, you are too young to comprehend the violent events that unfolded this month in Charlottesville. At least today, for that I am thankful. I’m thankful because I’m having a hard time processing those events myself.

This is not the world I expected to be raising you in. I never dreamed that violent, torch-bearing Nazis would be on the list of threats I’d need to worry about. I never imagined I would be leery of letting you watch the President of the United States speak on television. And yet, here we are. I wonder, how did we get here? But more importantly, what do we need to do to change? Because we MUST change. I refuse to stand by and let you grow up in a society that normalizes racism and white supremacy.

I’m just a mom, but I’m your mom. I don’t have a huge platform, but for a few years, YOU are my captive audience. And if I’m going to do something to change the world, I want it to be by raising strong, confident children who are not afraid to be loud, disruptive, and outspoken about what is RIGHT.

YOU CANNOT BE SILENT ABOUT RACISM.

I’m going to teach you that there are a lot of grey areas in life. You’ll need to learn nuance, and to consider other’s experiences and points of view when making moral judgements. Racism is not one of these areas. There is no grey. You pick a side.
You are going to be confronted with racism. It’s not an if, it’s a when. And I hope that my example will teach you that racism, no matter how slight, is unacceptable. You don’t let it slide. Ever.

You will have friends who don’t look like you. I will make sure of it. You aren’t colorblind, and you will notice the differences. Differences are not just tolerable, they are wonderful. People look differently, act differently, and live differently, and that’s GREAT! We don’t learn and grow when we aren’t challenged by and exposed to diversity.

The hard part about all this is that standing up for what is right isn’t always going to be the popular thing to do. You may be laughed at, or talked about behind your back. You may even lose some friends. I’m not going to say, and that’s ok, because it’s not. It hurts, a lot. I’ve been there. But the hurt caused by racism hurts oppressed people a lot worse and for a lot longer.

To tell you the truth, I’m scared. You won’t always be four and two, and sooner than later, you’ll be out in the world, making your own decisions and being influenced by people other than me. And the world can be so cruel. Because of the color of your skin, you won’t face some of the oppression that your friends of other races will. That’s called white privilege, and it’s real. A lot of people don’t understand privilege and will try to tell you it doesn’t exist. Privilege doesn’t mean you won’t face challenges or have to work really hard in life. It means that you won’t face the specific obstacles or hardships that people of other races face due to systemic racism and oppression. You don’t need to feel guilty about your white privilege, but you do need to be aware of it and always be an ally and condemn any and all racism that your friends experience. It’s going to be scary, but you are brave. That’s what being brave means: doing the right thing even though you’re scared.

I know there’s going to be some tough conversations in our future and you are going to have some hard questions about the reality of the world you are growing up in. The truth is, there are some really evil people with some really terrible beliefs. And sometimes, they do terrible things because of those beliefs. And our only hope in stopping them is to prevent them from feeling like they can get away with those things. Again, stand up, act, and be loud. Hate will not win.

I’m a white, middle class, stay at home mom to three young children. My life is busy, and many times, chaotic. There are constant messes, activity schedules, and exhaustion. Racial issues don’t directly affect me and my family, so it would be easy to dismiss this weekend’s events in Charlottesville, Virginia and carry on with life as usual. But I don’t want to raise my children in a country where white supremacists marching in the streets is normal, or in any way acceptable. I want them to read about Nazis in their history books, not on their social media feeds. I’ve also come to realize that when I deliberately choose to turn away from injustice and do nothing to stop it, I’m partly to blame for these monsters feeling so emboldened.

Like so many Americans, I was horrified seeing the images and listening to the white supremacist rhetoric coming out of Charlottesville. And also like so many of my fellow white Americans, I also felt defensive and was tempted to, along with denouncing the behavior of the Alt-Right Nazi protestors, become defensive and completely separate myself from them. I really, really want to say that they are a fringe group, and don’t represent me, my community and my culture.

But I can’t say that.

And I really want to excuse myself from this issue, and believe that I don’t have any responsibility in perpetuating white supremacy in my country.

But I can’t do that.

No, I don’t know any actual Nazis. I don’t have any friends that condone the behavior or hate speech of white supremacists, although I have plenty that have remained silent. And plenty of times, I have remained silent too. I have made a conscious effort in recent years to pay attention and speak out against injustice when I see it. But I haven’t done nearly enough.

I’m surrounded by (and participated in) the mindset that there are schools in our district (with the same standards, and same curriculum) that just aren’t acceptable, but others are the best of the best. Guess which ones have more white kids?

All the churches I’ve attended in my lifetime have been overwhelmingly white. I grew up with images of Jesus as a white man with long, light brown hair, and this is how I picture Jesus in my mind, even today.

I’m guilty of making snap judgments of people based simply on their race and appearance.

Until recently, I’ve never consciously thought about my race, and all the privilege it affords me. I’ve learned that white privilege doesn’t mean that I won’t struggle, or have to work hard in life. It means I won’t have to face systemic oppression and additional obstacles due to the color of my skin. My children’s toys, television shows, books, teachers, and elected government officials overwhelmingly represent their race, and they probably won’t ever question that without deliberate conversations. I benefit from racism, and that’s a really sobering reality to face.

Although I absolutely believe that the election of Donald Trump has encouraged the rise of these hate groups, racism isn’t a partisan issue. It’s not a liberal vs. conservative debate. It’s a problem with humanity. And the problem isn’t going to fix itself, and people of color can’t fix it themselves. It’s going to have to be white people like me. And like you. We have to use our voices and lives to denounce both Nazis marching in the street with torches, and casual racist jokes around our dinner tables. We have to hold our elected leaders accountable, insisting that they specifically denounce white supremacy by name, even if it costs them votes. We have to do things and have conversations that make us uncomfortable. All of us are responsible for allowing white supremacy to seep into our homes, our schools, and our churches. And if we don’t stop it, it won’t stop. This is on us, white people, and we must do better.

This is the last month I will ever refer to the age of one of my children in months. And honestly, I’ve jumped ahead and in my mind, you are already two. Your independence, silliness, and tantrums, along with your constant talking, put you solidly in the “two year old” category. And lets talk about your talking for a minute. I know over the past few months, I’ve mentioned that you have been talking more and more, but holy cow, these last couple weeks have been a language explosion for you. You basically can say anything now, and you know the words for everything. I can understand most words you say, and you are starting to string two and three together. My favorites are asking you to say all the animal sounds, the people in our family, “thank you” and of course, “I love you”. 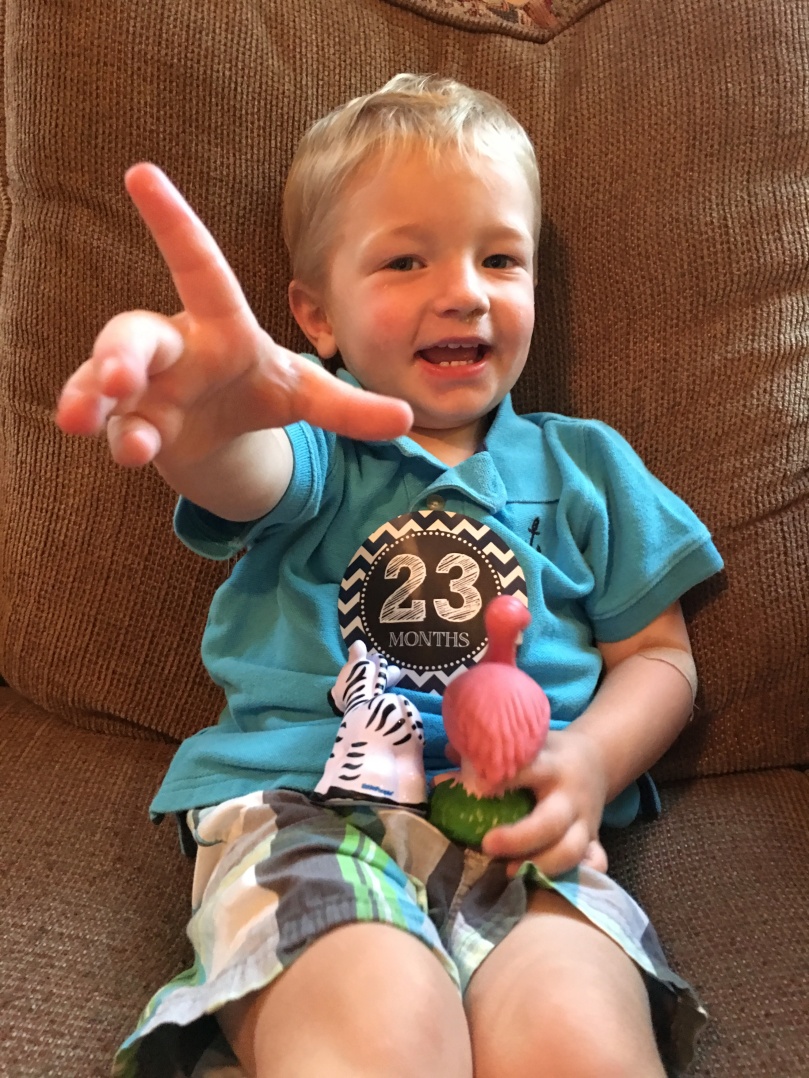 Nolan, I hope this coming month is your best yet. You just keep getting cuter and funnier and I can’t wait to jump into your third year next month. Happy 23 months Noly Poly. I love you so much. 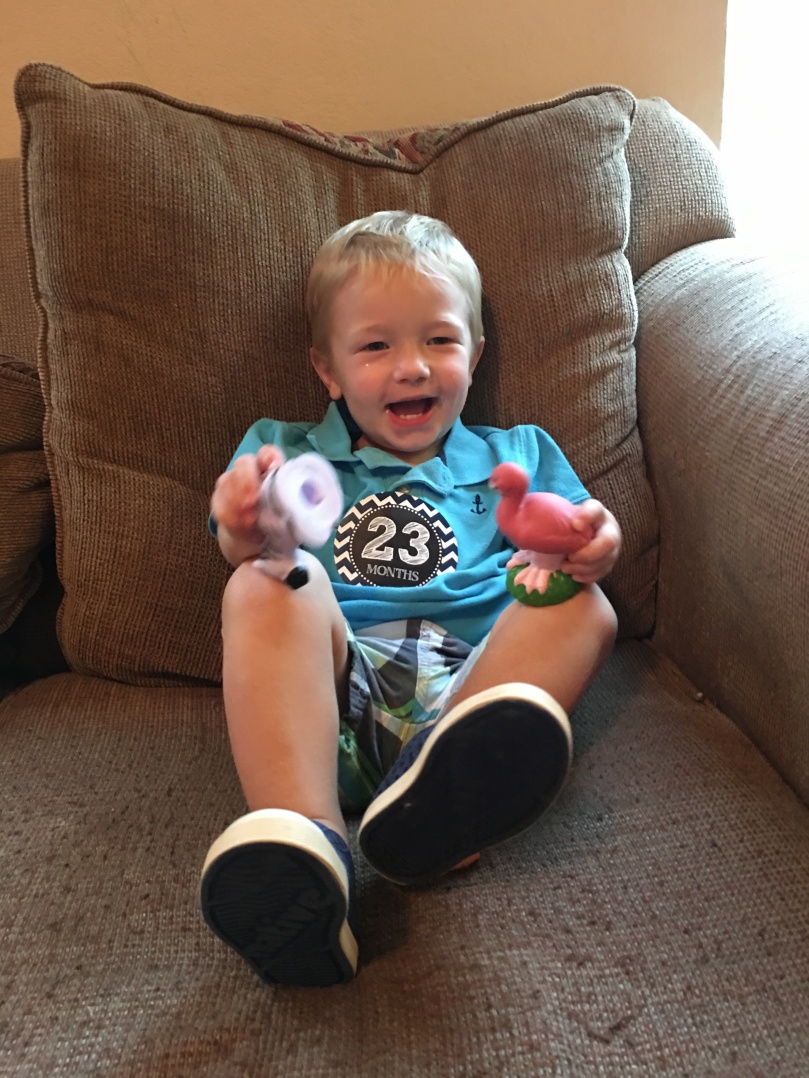