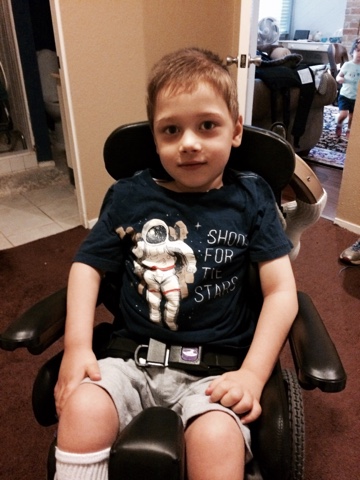 Happy Birthday sweet boy (1 week late). Yeah, the late thing- get used to that. I am certainly not on top of blogging/memory keeping these days. Between you and your little brother and sister, I barely have time to breathe.

Your actual birthday came and went, but your Daddy and I keep marveling at the fact that you are five now- FIVE! You are so big, and so grown up looking. Worlds away from that teeny tiny 5 pound baby we met half a decade ago.

You are doing really, really well right now. Everyone comments on how alert and engaged you are. Your surgery in May was a success and you are finally pain free for the most part. It was a long, hard summer of recovery for you, but I think the end result was worth it.

You love interacting with people, and adore when people get close to your face and talk to  you. You are back at your wonderful school for your 4th school year there- every day I am so, so thankful you have a place to go that you love so much with teachers who love you and take such good care of you.

Your Veggie Tales obsession continues, and you are happiest when Bob and Larry are singing to you while you chew on one of your toys.

You have a new baby brother, but his presence hasn’t seemed to faze you. I love the fact that you now have a brother, and I’m excited to see how Nolan grows up to love you. I know Charlotte isn’t being particularly nice or kind to you these days. Please just give her time- she’s not as easy going about this huge life change as you. She does love you and she’ll come back around.

Grayson, as always I am so proud of you and proud to be your Mommy. Happy 5th, my Monster Man. I love you to the moon and back. 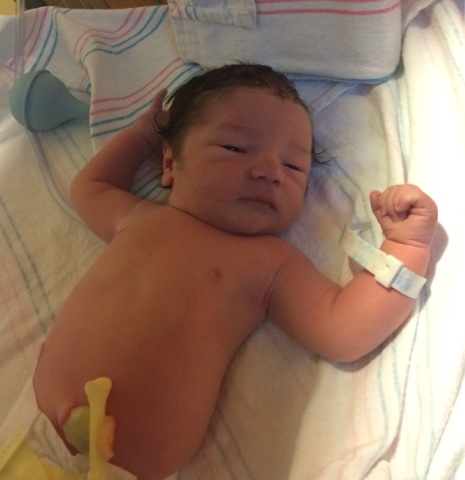 So, I had a baby two weeks ago. And every night I’ve thought that I really should update my blog, but of course any moments of rest and sleep I can get have won out every time. 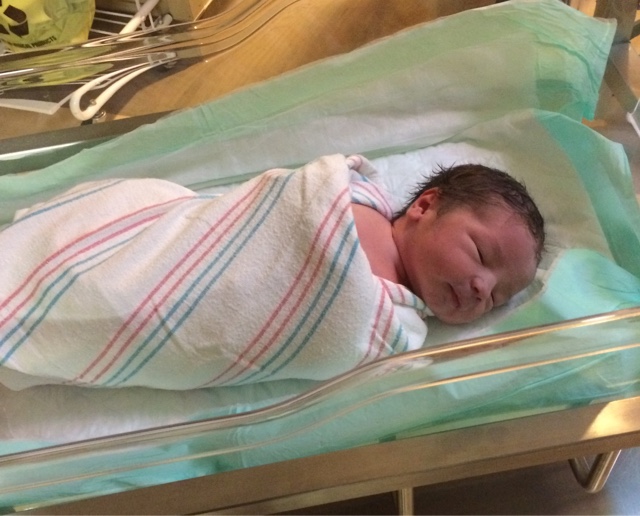 Nolan Reid was born September 1 at 8:31 pm. He weighed 7 pounds, 6 ounces and was 20 inches long. He has a head full of dark hair which has already won him hundreds of compliments. He looks a lot like his big sister, but heaven help me if he has her personality too. I got my wish of having a September baby (barely!) but feel a little bad that he was born on his cousin Theo’s second birthday- especially after Charlotte was born on my brother’s (Theo’s dad) birthday. Oops. 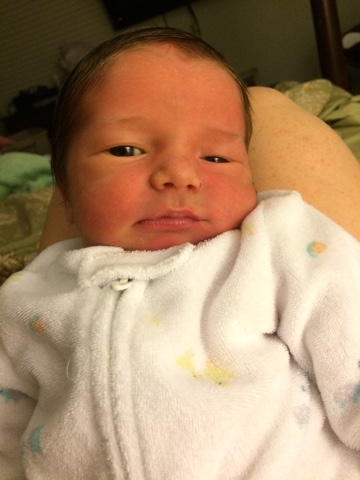 We chose his first name, Nolan, after my childhood nickname. I played softball and when I started pitching, I loved to strike batters out and my dad started calling me Nolan (obviously after Nolan Ryan). So this baby is sort of named after me. Reid is his middle name for no other reason other than we love the name- and yes, I know Nolan Ryan does have a son named Reid, but that really had nothing to do with our choice. 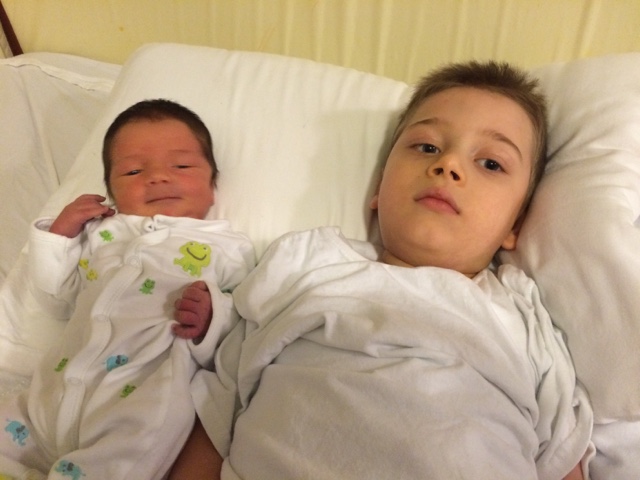 I may or may not write Nolan’s birth story out- but the birth was very similar to my other two, and it really was a wonderful experience. I am so thankful that I’ve had three births that have been so positive and exactly what was best for me. I do wish I hadn’t scarfed down that La Madeleine sandwich an hour after Nolan arrived- that did not end well! 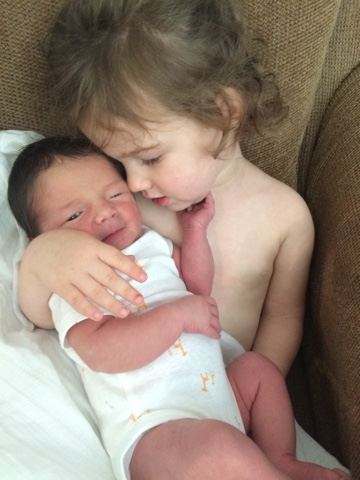 The easiest part of having a third baby is the actual baby. I really think everyone should have their third baby first, because oh, to be a first time mom and be this relaxed about the baby and have only ONE baby- well, that’s the dream. Seriously, Nolan is nothing but a sweet little ball of cuddles. Breastfeeding is going fantastically, much to my surprise. I’m not tracking how long he’s nursing, or really how long between feedings, and somehow it’s working. I’m changing a million diapers a day, and he’s been gaining his ounce a day that he’s supposed to, so I’m just not going to worry about it. Such a change. I think the fact that I had a really hard pregnancy is now paying off- I’m already used to being up in the night, so the nighttime feedings haven’t left me so fatigued this time around. Now, I’m only two weeks in, and I know that could change, but for now I feel like I’m managing it really well. 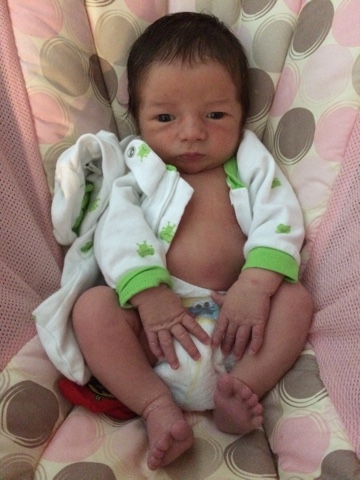 The hardest part of having a third baby has without a doubt been managing Charlotte. She adores Nolan, but is making the rest of us pay for turning her world upside down. She melts down constantly over the smallest things, and nothing is ever right. I am trying so hard to be patient and understanding with her, but it’s really, really hard. By about 4:00 in the afternoon I’ve hit the wall and start counting the minutes until I can put her to bed. Interestingly, in the last few days she’s been taking a lot of her frustrations out on her older brother. She’s been telling me, “You are Charlotte’s mommy and Nolan’s mommy- NOT GG’s mommy”. (she calls Grayson GG). She completely loses it when I tell her it’s time to pick Grayson up from school, and forget any kind of sane, rational behavior when I have to take care of him in any way. Poor Grayson- the totally innocent victim of psycho toddler!

Yes, it’s been really difficult, but then there are moments like this that (almost) make the crazy worth it.

This week, we have finally (FINALLY) started our fall schedule. It was a brutal, long summer and I am so glad to have an out-of-the-house routine again. Yesterday we went to MOPS and today Bible study. People say they are amazed that I am out of the house so soon, but it’s not amazing, it’s survival. I feel so much better physically now that I’m not pregnant, and I’m hoping my motivation to blog regularly again will return. I know there will be lots to write about on this new crazy adventure! 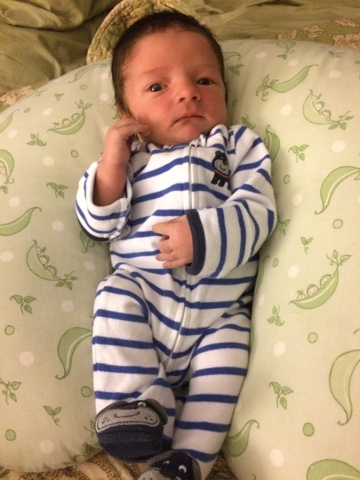