A few months ago, Grayson had neuropsychological testing done. We requested this testing for him since he will be starting public school in the fall and we want to make sure we give the school a complete picture of his capabilities and potential. I was especially interested in learning/confirming his cognitive ability- my biggest fear for Grayson was that his intelligence and awareness were much greater than they appear and that his mind was “trapped” in his body. His neurologist has repeatedly assured me that is not what is going on with G, but I still worried.

Tuesday, I met with the psychologist to discuss his report. There were no shocking or upsetting parts to the report; basically everything in it confirms what his doctors have said and what we observe at home.

So many of these evaluations focus only on what a child cannot do and the skills he is lacking, but I love that this test focused just as much on G’s positive qualities and how they will be an asset to his learning and success in school as well as happiness at home.

Grayson was neatly dressed and appropriately groomed. He is a very handsome child with a beautiful smile.

Grayson was responsive to attempts at social interaction and laughed in response on several occasions.

Grayson frequently missed when reaching for an object on the first attempt but would successfully grasp the object after one to two more tries. When holding an object he was observed to move it from hand to hand.

Throughout the evaluation, Grayson was very sweet and good natured.

Within the domain of adaptive functioning, he has an area of relative strength with leisure skills where he demonstrates behaviors such as listening to music for fun and relaxation and participating in a fun activity on a routine basis.

The doctor emphasized over and over how G’s social skills and lack of behavioral and emotional problems are such a huge strength. He said this will be a huge plus in a school setting, because teachers and therapists will be more likely to respond positively to him and help him really succeed because he will be able to give them social feedback (and him being so cute doesn’t hurt either).

As for his cognitive ability, the report reads:

Based on observations of his behavior and parent report of adaptive behavior, his intellectual functioning is likely to be consistent with an intellectual disability in the profound range.

Sad, yes, but also somewhat of a relief. His mind isn’t trapped in his body. And I will take Grayson’s sweet, social, happy self a million times over intelligence.

Grayson spends most of his awake time at home hanging out in his beanbag chair or wheelchair, listening to his music and just being with his family. 99% of the time, he seems happy and content to do this, and I asked the doctor if we can assume that he is in fact happy and content if that’s how it appears. Absolutely yes was his response. This was a huge relief to me and takes so much pressure off trying to come up with things to do with G throughout the day to stimulate and make him happy. Turns out, we are doing just fine.

He also made many recommendations how G should be taught, using lots of manipulatives, therapies, and consistent routines. He said progress will likely be slow and incremental, but that his education will be worth the effort.

Worth the effort. Definitely. 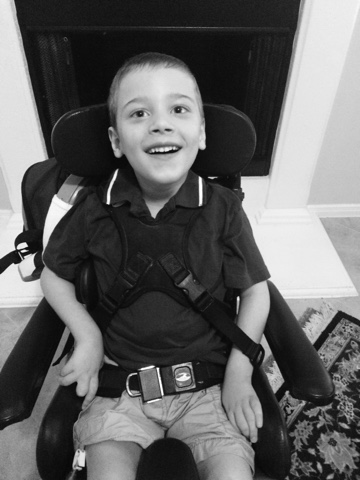 4 thoughts on “Worth the Effort”