For a few years now, I’ve really had a heart for adoption. I knew I wanted to have a biological child, and now that I have, I really want to experience pregnancy and giving birth again, if possible. But when I picture our complete family, there’s a little girl from China in that picture.

When Ryan and I were struggling to conceive, we actually went to a Chinese adoption seminar. We learned a lot about the process and the loooonnngg wait to adopt a healthy infant (which by now is I’m sure even longer). The family giving the seminar was there with their three adorable Chinese girls, who played under the table in the library conference room and sweetly gave us hugs at the end of the meeting. The parents really encouraged us to look into the Waiting Child program for adopting special needs kids. At the time, I thought I could do that. I could parent a child with special needs.

Well, apparently I can do it. I am doing it. Grayson has special needs, and while sometimes stressful and overwhelming, I think I am handling this well. I am actually surprised at how strong I am. I’m not trying to be conceited, and I hope that’s not how that comes across. I just know I am Grayson’s mommy, but he’s truly God’s child, and God trusts me with his life.

So lately I’ve been thinking about adoption again. Adding another child to our family is most likely further in the future than our original plan, because Grayson needs our complete focus, energy and financial resources right now. But someday, I know we will be ready for #2. Whether he or she will be biological or adopted, I don’t know. If you ask me my “plan” I would tell you #2 biological and #3 adopted. But we all know how plans work out…

The questions I ask myself: Could we parent and afford 2 special needs kids? If we adopted a child with a similar disability as Grayson, would that be positive for him? If our second child has no issues, would having 2 siblings that do be fair to him or her? Could we even afford to adopt at all?

I don’t know the answer to any of these questions, and thankfully, I don’t need to even think about them seriously right now, tomorrow, or next week. It’s something so far in the future that may or may not even fit into our life in that future. But I do see that little girl in that picture.

Adoption is a wonderful, amazing thing. There are millions of children all over the world that need loving homes. Unfortunately adoption is EXPENSIVE- crazy expensive. There’s a great blog I read and the author and her husband are adopting a baby who is due next month. They have been working like crazy to try and raise the funds to adopt this child. This weekend, they are holding their second online auction to raise the rest of the money they need. Check it out: there’s some really great stuff for sale!

I finally got G’s laugh on camera. Ignore my goofy voice (yes, I know all moms say that when they post videos). No, he doesn’t do anything without his hands in his mouth!

Ok, so I had to add this one because it’s just funny and shows my bad dog in action…please don’t call CPS on me!

I should have known it wouldn’t last. Like they say, once you think you’ve got a baby figured out and you think you’re past something, reality smacks you in the head…hard.

If the past three nights are enough proof, Grayson is no longer sleeping through the night.

If I wasn’t so tired, I might scream. Aaaaaa!

Now, in his defense, I’m pretty sure he’s teething. Saturday, he started becoming more obsessed with his hands that usual (is that even possible?) and makes this panicky sound while he’s frantically gnawing on them. He’s also become pretty irritable. He’s obviously in pain, and I feel awful. Thank God for Baby Tylenol.

Speaking of God, he got kicked out of the church nursery yesterday. My little juvenile deliquent. Ok, so maybe kicked out isn’t exactly accurate, but whatever. Ryan and I are in service, and a girl from my Bible study taps me on the shoulder.

Points to the (giant) screen: “They need you in the nursery.”

There’s my son’s name, on the giant screen. I didn’t even notice it. Mom of the Year, right here.

So I go to the nursery wing, and the nursery teacher is in the hall with Little Dude, his face wet with tears. Apparently, he woke up from his nap and started screaming and they couldn’t calm him down, not even with a bottle. The teacher was very apologetic for calling me out of service, and was so sweet about the whole thing. And Grayson was fine- he just needed his momma. That’s what I’m telling myself anyway.

So this teething thing is going to last awhile? Eek. And the sleeping thing, sigh. I was quite enjoying not getting up every few hours to drag my lead body in the kitchen to make a bottle. And staying in bed until gasp 6:00. I know, the gluttony.

So now it’s 6:12 AM and Grayson’s taking his morning nap.

At least we’re clear who’s running the show around here.

It’s almost been 6 months since I’ve been pregnant, and I haven’t exactly been too motivated to get myself back into shape. I definitely haven’t been laying around eating junk, but I also haven’t made a point to excersise regularly and make conscious good food choices. Honestly, I was SO hungry my whole pregnancy that I kind of got used to eating whatever I wanted.

So I’ve decided it’s time to do something for me. I want to feel good about myself again, which I know will have a positive impact on how I relate to my family. I’ve also been thinking about Grayson, and how we need to set a good example for him by the foods we choose to eat. We plan on starting solids in a few weeks, and of course are going to feed him the freshest, healthiest organic foods we can, so why should we not eat the same way?
I’m going to start with things that are easy- giving up my morning bagel for fruit and oatmeal, eating salads for lunch instead of a grilled cheese sandwich or leftover pasta, and making simple, healthy dinners. I also really want to excersise a little each day- I’ve been taking Grayson for long walks every afternoon, which we both enjoy. One of these days I might even get back to running- we’ll see.

We went to SmashBurger for lunch today with friends- I am considering it my last “bad” meal- at least for a while. Oh why does bad food have to taste SO good?!
﻿﻿

Ever since we found out Grayson has developmental and vision issues, I have really tried to have a positive attitude about the situation. Yes, I have my moments of sadness and feeling overwhelmed, but for the most part I have stayed busy working on skills we learn in therapy and focusing on Grayson’s successes.

One thing I have really tried not to do is worry about how Grayson compares with babies his own age or even a little younger. Really, I shouldn’t compare him anyway, issues or not, but let’s be honest- all moms do it.

I found myself comparing Grayson to other babies yesterday morning. We take a mommy and baby music class on Fridays and one of my best friends and her baby are also in the class. They couldn’t make it yesterday, which was fine, but I did a lot more observing and a lot less chatting than usual. There is one baby boy in the class who is one day older than Grayson. He’s sitting on his own already. Grayson is not, and our OT thinks he will probably be a few months behind on that skill. Also, at the end of the class, the teacher always blows bubbles, which make the babies so excited. This is the only part that makes me sad, because Grayson can’t see the bubbles, so he doesn’t get excited.

So I’m not perfect. I have my moments where I wish G was meeting milestones “on time”. I wish he was picking up toys and holding his head up better. But he’s not, and that’s ok. He’ll get there.

We did get some good news this week. Grayson’s blood tests came back normal, so he doesn’t have to see an endocrinologist at this time. I am thankful for this, but at the same time I feel stuck- where do we go from here, medically? Do we try and find another opthamologist to get another opinion? Do we continue therapy and wait until he’s ten months old to follow up like our opthamologist recommended? I just don’t want to miss anything, especially where my kid’s brain is concerned.

Lot’s and lots of questions, and unknowns. But maybe this is how it’s supposed to be. Maybe God is teaching me patience, which as my family especially knows, I don’t have a whole lot of most of the time. G isn’t going to do things 100 mph, like I am used to living my life. Maybe there isn’t a medical answer right now.

This is a picture I took this morning- we are working on Grayson’s head control by having him sit in a little booster seat stuffed with blankets around him. We are also trying to get him to touch/grab toys on the tray. Right now, he hasn’t figured out that his hands can do things for him other than go in his mouth. The cutest thing about this picture is Hank in the background- just watching his brother work. I just love my two baby boys 🙂 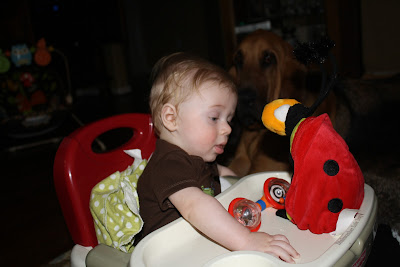 Most kids have to beg their parents for a dog- Grayson has FOUR! Of course, he doesn’t care about them, and actually has yet to really acknowledge their existence- but he will. I’ve been trying for weeks to get a good picture of G-man and his Hank-man, but so far Hank wants nothing to do with posing for a cute baby/bloodhound picture.

This morning, Grayson and I went to work at Waggin’ Tails for a few hours, and we took some pictures with Wyatt, the lovable lab that is affectionately known as the Sheriff of WT. Wyatt is sweet, gentle, and LOVES kids. He even has his own blog (yours truly is his ghost writer). So, not only does G have four dogs of his own, he gets to hang out with lots and lots of doggies (and humans who just love him) when we go to work. Lucky kid!