I really thought I was done writing political posts for the week, but I saw something today that really bothered me.

Wednesday night, Hillary Clinton made her first public appearance since her concession speech: a speech for the Children’s Defense Fund. Just a week after a crushing personal and public defeat, she picked herself up and gave a passionate speech in support of children and an organization she has worked for and supported for years. She wore little to no makeup and her hair wasn’t “done”. 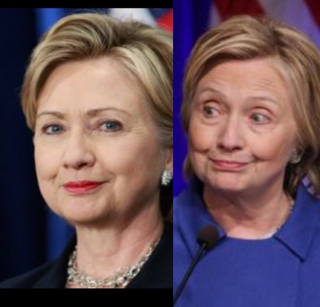 And she was mocked for it. For her appearance. A woman who has spent her life in public service, became the first woman nominated for President of the United States, and is also human and dealing with enormous disappointment, was mocked for looking old and tired. In 2016. I just can’t even.

I saw several posts on FB and Twitter (from women) saying she looked like “crap”,”death”, “this is what losing does to you after only a week”, and other things that I just don’t even want to type here because they are so mean and ridiculous. First of all, let’s look at reality. Hillary Clinton is 69 years old. Do you know what she looks like in that picture on the right? A 69 year old woman. And the picture on the left? That’s a 69 year old woman who spent every day for 18 months with a team of professional makeup artists and hair stylists. It’s not reality, and she doesn’t have to play that part anymore.

I’m incredibly bothered by these posts for several reasons.

1. They aren’t kind. Actually, they are downright mean. As someone who has been made fun of for my appearance (what woman hasn’t?) how would a woman especially think it’s acceptable to do this? I don’t care if you think Hillary Clinton is the absolute worst and you are celebrating that she didn’t win the election, she’s still a human, a woman, and she doesn’t deserve to be criticized for this.  And especially if you are a Christian, you are called to love your enemies. Period. You consider Hillary Clinton the enemy? Fine. Love her. Pray for her. The election is over, you can stop beating her down, especially for reasons that don’t impact our government at all. Just stop being mean. It’s not productive and it’s continuing to harm the church’s credibility. (And yes, I realize that Donald Trump is mercilessly mocked for his appearance too. That’s not right either. Let’s just STOP).

2. They are sexist. This is what we women do to each other, isn’t it? We are so insecure in our personal physical flaws and imperfections that we pick each other apart. We are obsessed with women’s appearances and wardrobe choices, but it doesn’t go both ways. No one picks apart the clothing choices of a male politician when he makes a speech, yet how many times did I read about HRC’s pantsuits- the color, fit, style? A ton. When a man finishes his term as president so much greyer than when he entered office, we blame the stress of the job and how hard he worked. Clinton makes an appearance just a week after a grueling campaign season and a week of crushing disappointment and we say she looks like death. In a FB thread on one of my other posts last week, a man replied to one of my friends comments referring to her as “Girlie” and then made his point. And 5 of my female FB friends Liked the comment. Another friend then said, “This is why we don’t have a woman president.” In my conservative circles, the word feminism is seen as a dirty word. It’s not. We need feminism because of instances like this. We need a lot more respect for ourselves as well as other women. I’m starting to think that there’s a lot of women out there who aren’t outraged by DT’s treatment towards women because they just don’t care, and they’ll even participate in the degradation themselves.

3. They don’t help us come together. We are obviously really divided right now, and have got to figure out some way to have compassion and empathy for the “other side” (I am including myself, more than anyone else, in this statement). I’m really trying hard not to criticize people or ideas for reasons that aren’t productive or that don’t reflect my values. I really think we need to keep having hard conversations in order to find a common ground. Picking apart someone’s makeup regimen isn’t going to do that.

4. I’m raising a daughter. It’s so, so hard to talk to Charlotte about why I put on makeup, or why yes, I have to fix her hair every day, without her thinking that her worth comes from her appearance. I had so much hope that this generation would be different- that we’ve learned how to emphasize character over body type, compassion over mean-girl judgement. Now I’m not so sure, and I’m discouraged.

Ladies, let’s give Hillary Clinton, and each other, a break. Let her grieve, leave her alone. I’ll be 69 one day too, and I hope I don’t feel the need to hide myself behind makeup every single day. Let’s have tough conversations, but on things that really matter. And if nothing else, can we just not be mean? I think that would be nice.

For an interesting take on sexism from a woman who just ran for local office, read this.

One thought on “Mean: #NaBloPoMo Day 18”