Yesterday morning, G’s nurse, who had been with him all night, told me that he’s thrown up formula about an hour before. G throws up all the time, but because his feeding tube bypasses his stomach and goes into his intestine, throwing up his food is not normal. I called and cancelled his school bus, texted his teacher that he wouldn’t be at school, and we headed to the ER.

The X-ray of his abdomen showed that his tube was in the right place, so the doctors were stumped. He was a little congested, but wasn’t acting sick or that he didn’t feel well, so they decided not to run labs or do any IV fluids, so after a few hours, we were sent home (with no explanation as to why there was formula coming up, but he did throw up twice in the ER and it was clear, so…whatever).

At 11:00 last night, G woke us up with his retching. It wasn’t normal though, he was really struggling to catch his breath and sounded really croupy. This went on and on for at least 10 minutes and at one point we wondered whether we should call an ambulance. We hooked him up to some oxygen, and thankfully that calmed his breathing, but he was still agitated and was now running a fever. Ugh. After about an hour, we got him back to sleep and he slept the rest of the night. He had a low grade fever this morning but was acting much better.

I put him down for a nap at 11:30 and he slept for seven hours. Seven. He woke up less than an hour again and sounds gunky and was struggling again when he threw up. We have him hooked up to oxygen right now and are just kind of hanging out waiting to see which way this is going to go.

Very rarely do we make it through an illness without a hospital admission. G’s broken body just can’t fight it off on his own. I’m really irritated that we’ve already been to the hospital once this weekend. Maybe, just maybe, he can ride this one out at home. 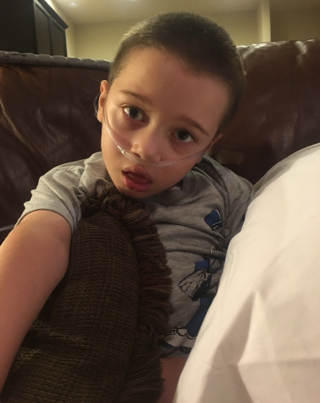