So What if I haven’t blogged in weeks…again. These days, unless it’s crucial, I just don’t do what I don’t feel like doing.

So What if at the end of the day all I feel like doing is crawling into bed and watching mindless TV or listening to podcasts.? At 31 weeks pregnant, I still feel like absolute crap about 85% of the day. My doctor thinks I have some sort of blood sugar issue, even though I passed my 3 hour glucose test with flying colors. She’s having me check my blood sugar when I feel really bad, and so far…normal. She also suggested sipping Gatorade throughout the day. At this point, I’ll try anything, but gag, Gatorade is nasty stuff.
So What if ALL of us (not just the 2 year old) are having way too much screen time this summer? My counselor said this needs to be my Summer of Survival, and that’s what it has been. So SO WHAT? I am kind of bummed, however, that we finished season 3 of OITNB so quickly- we should have stretched it out a little longer.
So What if I’m really disappointed I’m not going to BlogHer this weekend in NYC? It’s totally impractical this year, both physically and financially, but I still really wish I could go after having such a fabulous experience at the conference last year. And So What if I’m torturing myself by still following the FB group for people who are attending and reading all of their posts about being so excited? Womp Womp.
So What if Grayson hasn’t worn pants/shorts in almost 3 months? Poor little dude is still having a lot of pain in his hips and legs and is just too sensitive to get clothing on his bottom half. I guess it’s a good thing it’s not February or he’d be freezing!
So What if my major accomplishment of the day was ordering newborn diapers, wipes and new bottles for this baby who is now coming sooner than later- yikes! I am so excited to meet him or her but have had absolutely zero motivation to get anything ready. Poor third child- it really does make me a little sad how little excitement I have for any of the baby “stuff” other than the actual baby.
So What if it seems more likely than not that I’ll have 3 little ones in diapers in about 8 weeks? Charlotte has been less than enthusiastic about using the potty and Mommy has slightly less enthusiasm than her about pressing the issue. The one time she actually went in the little potty (after sitting on it for about 45 minutes while she had “screen time”) I threw up violently after cleaning it up- good grief! She’s only just now turning 2 1/2, so I think we are just going to give it a little more time- at least until my gag reflext improves a little.
So What if I didn’t share these pictures on the blog when it happened, but want to now? A few weeks ago, the four of us and my mom went to San Antonio for one night to go to Morgan’s Wonderland, an amusement park for kids with special needs and their families. We had such a good time. I choked up the first few rides we went on; the staff just took Grayson and strapped him in, no questions or hesitations. He got to participate in EVERYTHING, which never happens. It was magical. He rode the carousel, the train, a car that went around the park on a track, and a wheelchair swing. Charlotte adored the park too- there were no lines and they let her do whatever ride she wanted for as long as she wanted; I think she and my mom rode the carousel about 15 times. We were only there about 3 hours (Grayson is so sensitive to the heat and Charlotte was exhausted) but will definitely go back! 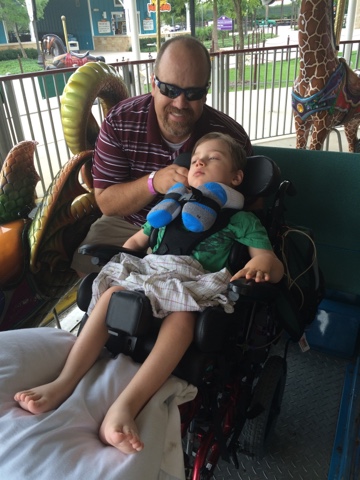 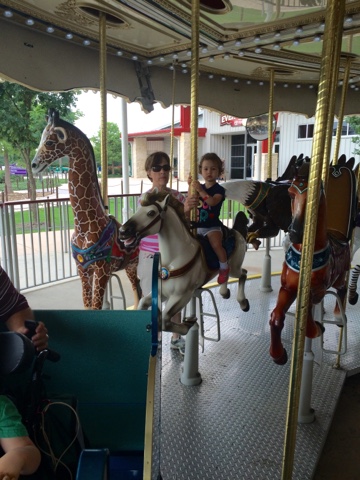 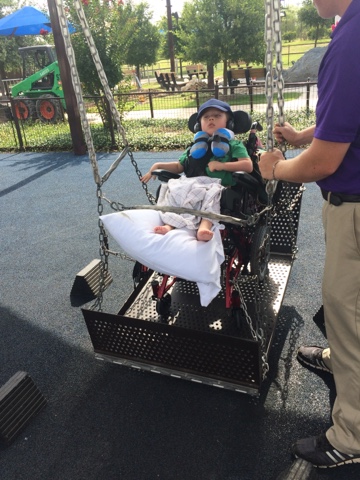 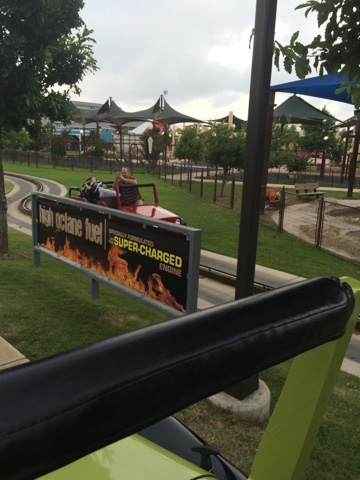 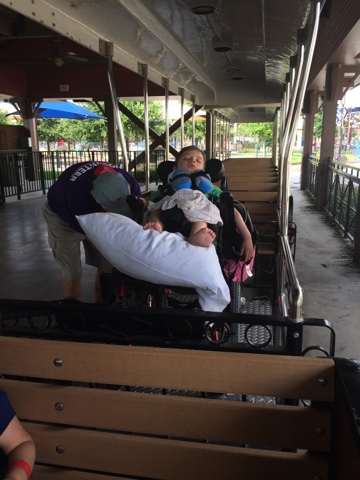 What are you saying So What about today?

2 thoughts on “So What Wednesday”