I’ve been trying to reflect a little bit on this day- the anniversary of Grayson’s diagnosis. Mostly I’ve been distracted- running errands, lunch with a friend, and dealing with the every day craziness that is life with two little ones. But then this afternoon I just happened to visit a friend whose baby has a terminal illness and as I held that beautiful little girl (I really think sick kids are some of the most gorgeous children) I fought back tears. It’s just so unfair and unimaginably horrible that our precious kids are going to die of these diseases and suffer along the way.

Lately, when people ask me how Grayson is doing, I answer positively that he’s doing really well. And he is. He hasn’t been sick and in the hospital in months, his seizures are a rare occurrence, and a few recent medication tweaks have proved successful in improving his endurance, energy and connection with people. The biggest change (and probably the cause of a lot of these results) is we’ve finally after YEARS of struggle, seem to have his vomiting under control. He still throws up 1-2 times a day, but what a difference from the 5-6 times of just a few months ago.

We’ve also been trying to make a conscious effort to take Grayson with us when we can, even though it’s always a ton of work and sometimes scary. We took him to the beach late in the summer, to the ranch a few weeks ago, and last weekend on a church retreat. I feel like we pack up practically our whole house anytime we go somewhere with him, but each time, he has surprised us with how well he’s done.

On the other hand, part of me wants to scream “THIS is ‘doing really well’ ? Really?” Imagine if you threw up every day, even just once. Every single day. I would be miserable. I’m so thankful that his therapist reports he’s holding his head up for her for a minute at a time now, but also so pissed off that this is something I have to be thankful for. It’s a fine line- being grateful for improvements and loving who Grayson is, not who I wish he could be, and at the same time being righteously angry that this is his life. His life, where improvements will be subtle and probably not miraculous, and where “doing really” well could disappear in an instant.

When Grayson was diagnosed with Leigh Syndrome two years ago today, all I could think was he’s going to die. I still think about losing him quite a bit, but my thoughts are more centered on his future: his life, not his death. I think about the challenges of taking care of him as he gets older, and bigger. I think about the impact his disease will have on his sister’s life, and our family. His doctor believes that he could have years left with us, and while this is absolutely the best possible news in our situation, it’s also scary to think what those years are going to look like. I just hope for Grayson, he continues to always feel love and peace from those of us who love him so, so deeply. 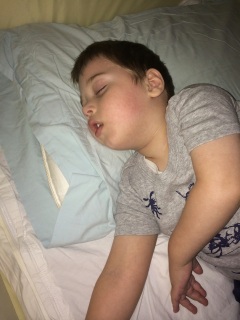