Grayson is in the hospital. I sensed all weekend we were headed that way- he was just “off” to me. A little too much crying, a random fever in the middle of the night, and some unscheduled naps told me something was up.

Grayson’s labs look ok (or, at least they did this morning), he hasn’t run a fever since yesterday, and yet, he’s sick. Crying. Vomiting. And just a few minutes ago, seizing.

I’ve held him a lot the last two days. I held him on the couch while he slept, trying to decide if we really needed to go to the ER (yes, we did). I held him in the ER bed while he cried himself to sleep after being poked multiple times to get a good IV. And this afternoon I held him in the uncomfortable chair beside his hospital crib as he wretched and vomited violently.

I’ve heard parents say sometimes they like it when their kids are sick for a day or two because of all the sweet, cuddly snuggles. And I get it. The snuggles are wonderful. But for me, it’s bittersweet because my kid will always be sick.

Hospital stays are hard. They just are. They are a complete disruption of life, a logistical nightmare if you have more than one kid, expensive (we easily spend $100+ on food and parking in just a few days), and emotionally and physically exhausting.

Ryan’s spring break is this week. In one way, it makes life easier because there has been one available parent per kid . But it’s also sad and incredibly unfair- for Ryan and for us. We had talked about taking the kids to the zoo- but instead, we have a really great aerial view of the zoo from the 10th floor of the hospital across the street.

Earlier today, I thought for sure Grayson would come home tonight. But a few minutes ago, Ryan texted that he’d had a bad seizure (his first since his last hospital stay) and he’ll be staying another night and even moving rooms to be more closely monitored. 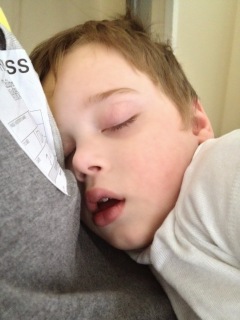 8 thoughts on “Another Hospital Stay”