Lately I’ve read a lot of blog posts and have been thinking about simplifying- specifically all the stuff that seems to accumulate and multiply as the days go by. We currently have not one, not two, but THREE storage units holding the contents of our old house- and we are most likely going to have to move into something smaller. Living with my parents has been eye opening in that I really can survive (and be just fine) on much less stuff than I thought. Of course, the day I went into labor, I moved in here with about 3 weeks worth of yoga pants and a few t-shirts to get me through, with the rest of my clothes in the back of one of said storage units. I’ve since bought 2 pairs of jeans and a few shirts, but oy, my wardrobe is terrible right now. Oh well.

When we move, we plan to go through the storage units and hopefully get rid of a lot of it. But here’s the thing…what in the world is with THIS??:

This is the current state of the livng room. We have A LOT of Plastic Baby Crap (PBC). And yes, I know babies survived for zillions of years and did just fine without excersaucers, swings, bumbos, baby gyms and rock and play sleepers. And I know some would say my children would be better off banging wooden spoons together and being attached to my body all day than with all this PBC, but you know what? It’s what works for us.

Grayson has almost zero interest in toys that don’t light up and/or play music, or put him in motion. He can’t stack blocks, he can’t look at books (on his own). But you know what he adores? His baby gym that lights up and plays really bad music. His excersaucer. His music table that he turns upside down while sitting in his Bumbo. His swing. And just today I put together the plastic car I ordered that’s the same as the one he rides around in at school- he loves it! We ❤ PBC around here. 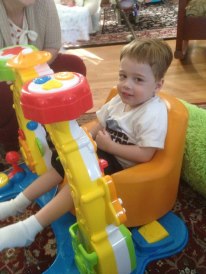 As for Charlotte, she’s into the PBC already too. As much as I would love to wear her attached to me all day (and I do hold her a huge portion of the time when it’s just me and her while G is at school), it’s just not practical with a toddler who can’t get around on his own. And since Grayson is at school 6 hours of the day, I try and devote as much time to playing with him in the afternoons when he gets home. Fortunately, Charlotte likes her swing, her Rock and Play, and her new baby gym which is off limits to Big Brother!

So we might soon be downsizing our house, our furniture and our clutter, but for now all this PBC is here to stay!