It’s my birthday, and today definitely won’t go down as one of my most “fun” birthdays, but I am totally, completely ok with that. It’s definitely not about me anymore, especially when dealing with day gazillion of a sick baby.

Yesterday was rough. After a few huge vomiting episodes in the morning, we schlepped back to the pediatrician. We saw our “backup” because Dr. D was out, but I like her and she confirmed that G was not dehydrated, which with his symptoms, would be the only reason to hospitalize him. But. BUT. He’d lost another half a pound. He’s down to 15.5 pounds (0.01%). Yeah. So I was freaking out about that but really the most important thing right now is getting him to stop vomiting and start feeling better. So I left with a refill prescription for Zofran and instructions to do my best to keep him hydrated and eating whatever food he will eat. Which is pretty much nothing.

This morning he woke up hungry (ya think?) and sucked down 3 ounces of formula. Yay! He seemed to be feeling a ton better, so I didn’t think to give him the Zofran. An hour later, up it came, like a fountain. Then later, same thing with Pedialyte. 2 doses of Zofran today, and there’s been no more vomiting.

We also had G’s EEG today at 11:00. Same drill as last time, but this time, he knows how to use his hands, and he’s a lot more opinionated about a million wires being adhered to his noggin. Because he wouldn’t leave them alone, the tech had to wrap his head in guaze so he wouldn’t pull them off.  He screeeeaaammed through the set up, but then drank a few ounces of a bottle and fell asleep through most of the test.

Oh, and see that red pimple-looking thing on his cheek? I was putting him in his carseat to go to the EEG and somehow (how? why?) his cheek got pinched in the carseat buckle. On top of everything else- ugh, I felt feel awful.

After the EEG, my friend Traci took me to lunch at Berryhill, my favorite restaurant. Definitely the highlight of the day. She had collected birthday cards from a bunch of my friends and bundled them in a cute little bag with ribbon- such a sweet gift! I got Grayson to eat a few bites of refried beans, and then we took some pictures that just make me laugh when I think about what the other people in the restaurant were thinking when they saw my baby- face covered in beans, crazy maniac hair with red marking pencil on his scalp that looked an awful lot like blood.

I love this last one- it makes me giggle because he looks like some kind of wild feral child, being raised in the jungle or something. 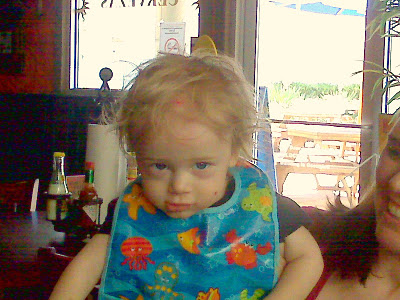 After lunch Grayson gave me my present from him- a 2 1/2 hour nap. But then he woke up grumpy and refused to eat again.

Can we just get back to normal? I’m just so confused about what’s going on. Is he really just sick with a virus and is having a hard time shaking it because of his deeper issues? Or is the vomiting actaully part of those deeper issues? I made him an appointment for later this month with a new Gastrointerologist- hopefully we can get some answers.

But until then, on a totally unrelated topic, here’s another picture that made me giggle (because I’ll take whatever giggles I can get these days!). And no judging that my Santa Fe bag is 1.still unpacked and 2. in the middle of the living room.

5 thoughts on “An Update and Happy(?) Birthday to Me”