So after the craziness of the last two days, I prayed last night that today would be uneventful, fun, and illness free. Grayson slept 13 hours straight and woke up babbling to himself in the crib and greeted me with his precious grin. And the best part- his eyes were clear!

Thinking we were over his illness, I changed his diaper and put him on the floor to play while I made his bottle. After his bottle, I thought he needed a (dirty) diaper change, so I laid him on the floor and took it off. It wasn’t dirty, but it smelled SO BAD, and it was soaked (after only 10 or 15 minutes wearing this particular diaper). After consulting several friends, I called the doctor, feeling kind of silly saying that my baby’s pee stunk. Anyway, they wanted us to bring him in just to be safe, so I scheduled our third doctors appointment of the week (and this is a short week!) after physical therapy.I happened to have a urine collection bag from the hospital (yes, I am now that person who has random medical supplies) so I strapped it on him and got us a sample.

After PT, we went outside, preparing to schlep over to the doctor, when I noticed one of my tires was almost flat. Oh.Come.ON! Thankfully, I don’t think there’s a leak (hopefully? wishful thinking?) and I aired it up at the gas station on the way.

They tested our sample and it came back that there is possibly an infection. However, since collecting in a urine bag isn’t sterile, they wanted to make sure and not give Grayson unnecessary antibiotics. So guess what that meant? Yep, a catheter. Oh. Come. On!

Grayson was a trooper for the cath, but screamed his little head off (wouldn’t you?). I was having flashbacks of newborn Grayson and the catheters that resulted in zero urine because he was so dehydrated. They hope they collected enough for the two tests they wanted to run- one is a culture they will send to a lab and we should hear results in a few days, and one was supposed to show results today. I haven’t heard any news since we left though.

So needless to say, this day wasn’t the relaxing, fun day I had hoped it would be. Whoever is sticking needles in a voodoo doll that looks like me, STOP IT!

We did have a good therapy session this morning, though. This is Grayson’s newest contraption- a stander. He loves it! I think he feels really secure and loves being able to stand and play with his toys! 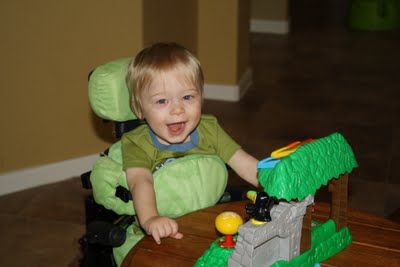